Garden nurseries and farms count the cost of Storm Emma 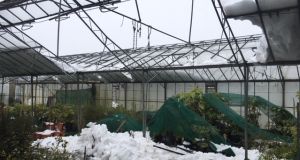 Damage to a glasshouse at Caragh Nurseries in Co Kildare. Photograph: Jo McGarry

Wholesale plant supplier Campbell Plants is facing a €400,000 bill as it counts the cost of Storm Emma. The Maynooth, Co Kildare, business suffered significant damage to polytunnels built for plants and to the plants themselves,

Colin Campbell is just one of many farmers and agri-business people across the country badly hit by the snow storms last week, with structures damaged by the weight of snow and crops and plants impacted by the cold.

“We’re 20 years here, and we’ve never seen anything like this,” he said. “We lost stock with the last big snow but nothing like this. It took us 20 years to build up the business to what it is, and we’d been potting stuff to get ready for a busy spring, and we’re stocking landscapers around the country. This is a bad blow for me and my staff,” Mr Campbell said.

He estimates there will be months of clean-up and construction before his business is back up and running. He is hoping there may be some Government storm-assistance programme put in place.

Weight of the snow

In Naas, Co Kildare, Caragh Nurseries suffered similarly, albeit to a lesser extent. The company, which is both a retail and wholesale nursery, had glasshouses destroyed with the weight of the snow.

The company, which pays around €7,500 a year in insurance, was told by its insurer it would not be able to claim for the damage because that would have required a more specific type of insurance.

“We’ve never had a claim...so we were surprised it wasn’t covered,” said Jo McGarry, the co-owner of Caragh Nurseries.

“It’s something we’ll have to absorb, we have no choice. What it is going to do is stop growth in other areas. We were going to put in a new glasshouse this summer, and that’s going to be put on hold because of this. Different things we’d planned, unfortunately they’ll have to be sidelined.”

On Karol Winters’ farm in Co Waterford around 20 cows and cattle were lost as a result of the snow. The weight of the snow crushed one of his sheds on the Friday. Mr Winters moved his animals to his other shed, a higher-quality building that had received grant aid from the government under an environmental protection scheme. On Saturday that shed also collapsed due to the weight of the snow.

Mr Winters estimates the damage will cost around €250,000 to repair, although he has comprehensive insurance on his sheds “and my animals are very well insured”.

While insurance will cover the damage he has had to move his cows to another site, and he expects that it will be just towards the end of this year before he will have two new sheds constructed.