Coca-Cola to buy the UK chain Costa Coffee for £3.9bn 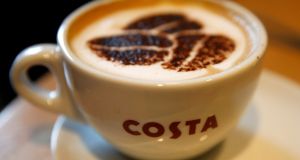 Costa was one of the few big coffee chains up for sale.

Coca Cola has agreed to buy the UK chain Costa Coffee for £3.9 billion (€4.4 billion) to gain a global brand to expand in hot drinks.

Whitbread agreed to sell Costa at a price that’s 16 times this year’s earnings before interest, taxes, depreciation and amortisation, the companies said in a statement Friday.

“Hot beverages is one of the few remaining segments of the total beverage landscape where Coca-Cola does not have a global brand,” Coca-Cola chief executive Officer James Quincey said in the statement. “Costa gives us access to this market through a strong coffee platform.”

Makers of soft drinks are branching out as consumers seek alternatives to sugary sodas. Earlier this month, PepsiCo agreed to pay $3.2 billion for SodaStream, which makes carbonated-water dispensers.

Costa was one of the few big coffee chains up for sale after Nestle SA and the Reimann family’s investment company JAB both went on an acquisition spree in the segment.

Whitbread said in April that it would divest Costa, after pressure from activist investors who said the business should be separate from its hotel operations.

The sale will yield a “substantial premium” to the value that would have been created through a spinoff, Whitbread said. The company will return most of the proceeds to its shareholders, it said.