Canada: Irish gin continues to make a splash as brands approved for sale 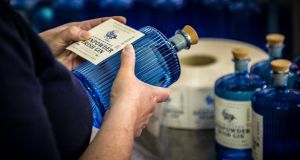 Drumshanbo Gunpowder Irish Gin is one of three brands being made available in Ontario from this week.

Irish gin brands continue to make a splash in the Canadian market with three products set to be available from this week in Ontario, which is the world’s largest controlled market for alcohol sales.

The trade mission to Canada followed the completion of the Comprehensive Economic and Trade Agreement deal between the country and the EU. The agreement removed the remaining tariffs on Irish gin.

The three producers will see their brands listed by the Liquor Control Board of Ontario (LCBO), which is among the largest buyers of alcohol in the world.

The LCBO was established in 1927 to retail and distribute alcohol and holds a quasi-monopoly in Ontario’s off-license trade.

Minister for Agriculture, Food and the Marine Michael Creed led a trade mission to Canada last year and asked the LCBO president to consider listing Irish gin. This ultimately resulted in the organisation running a competitive process to select Irish gin for listing in their stores.

“The value of exports of Irish gin from the Republic of Ireland was up 213 per cent to €4.2 million in the first nine months of 2018.

“Following last year’s successful trade mission to Canada and significant engagement by ABFI, the listing of Irish gin by LCBO will see Canada opening up as another key market for Irish gin producers,” she said.