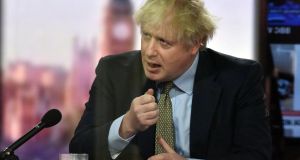 With the Brexit deal, Britain’s Prime Minister Boris Johnson achieved the “Canada plus” outcome he had sought from the start of his premiership. Photograph: Jeff Overs/EPA

Britain’s prime minister, Boris Johnson, is doubtless proud of his success in relation to Brexit. He outwitted his domestic opposition from the moment David Cameron called a referendum five years ago. He has achieved, despite the doubters, the “Canada plus” outcome he had sought from the start of his premiership. The trade and partnership agreement between the European Union and the UK is the culmination of a 25-year plan by a faction of the Conservative Party to get Britain out of the EU. Johnson, the opportunist, led the final charge.

Crucially, the deal avoids the no-deal train wreck that some Remainers may have wished for, anticipating some schadenfreude after five years of purgatory.

Johnson is like a 10-year-old with the keys to the toy shop: a free-trade deal, no tariffs, no quotas, outside the single market and customs union, and able to boast not only about the biggest free-trade deal in history, but that the ‘plus’ includes agreement on security, energy, transport, and the UK remaining in the European Atomic Energy Community, Euratom. The threat to energy supplies and vital medical isotopes is gone. Game, set and match to Team UK. So, has Johnson done a great job?

In the eyes of his supporters, undoubtedly. But the accolades should not disguise serious downsides. This is a big deal, a combined €734.8 billion in two-way trade. But it is the first trade deal in history to make trade more difficult than it was before.

Even in the nasty world of power politics, it takes a special kind of person to admire results achieved through means such as these. Johnson must be a keen student of Machiavelli

It also leaves much undecided, not least services. It loads UK businesses with red tape, new procedures and customs checks that will add £7 billion in costs and disrupt just-in-time manufacturing. Contrary to what Johnson said on Christmas Eve, UK exporters still have to comply with EU regulations.

UK citizens lose EU citizenship, the right to travel unhindered, set up businesses or reside in the EU. The European health insurance card no longer applies, so they face increased costs for medical cover. They need visas if staying in the EU beyond 90 days. Young people, students and apprentices lose access to the Erasmus programme which has benefited nine million Europeans.

Before complimenting Johnson, we should consider his methods. He has built his career in journalism and politics on lies and deceit. He compared the EU to Hitler, and despite promises to the contrary, sold the Democratic Unionist Party down the river by hiving off Northern Ireland into the single market to avoid a hard border with the Republic.

He wrecked the parliamentary careers of many in his party who objected to the direction of travel since he became leader in summer 2019.

He abused his position to curtail debate in parliament, unlawfully prorogued parliament and threatened to break international law.

Even in the nasty world of power politics, it takes a special kind of person to admire results achieved through means such as these. Johnson apparently studied Latin. He must also be a keen student of Niccolò Machiavelli.

Turning to the other side of the negotiating table, now temporarily abandoned, since bargaining and deal-making will soon be resumed, so much remains unresolved. Britain’s new status as a third country with a limited trade deal means arguments over regulations, compliance, governance, level playing field and, of course, fish will go on for years. It will not be pleasant.

What should we make of Michel Barnier, his team and the EU27 governments? What judgment do they deserve? They showed solidarity and consistency, almost to the end. They made late concessions on fish, the level playing field, state aid and governance to get the deal over the line. There are six reasons why they did this.

The first is Ireland. The EU stood by the Belfast Agreement, respecting the imperative to avoid a hard border. Special status within the single market for Northern Ireland avoids the World Trade Organisation obligation to check goods passing into Ireland from the North. This was always the biggest Brexit conundrum.

Irish businesses will be greatly relieved by preservation of the land bridge through Britain to and from the rest of Europe, used by 150,000 HGVs annually. The UK is a much lesser destination for Irish exports than in 1973, when 55 per cent went to Britain compared with 10 per cent now, but Irish agriculture would be badly exposed by no deal.

Britain’s police and National Crime Agency are in no doubt that security has been damaged by Brexit, even with a deal, but both sides have avoided a complete rupture that would have dramatically degraded co-operation in combatting serious organised crime and terrorism.

Third, trade. While the EU accounts for 44 per cent of UK exports, 18 per cent of EU exports go to the UK. The Brexiteer claim that the EU would give the UK a deal because of brie, prosecco and BMW was a parody, but the union was well aware that tariffs would damage businesses and employment.

Fourth, diplomacy. The EU is a powerful player in a multipolar world, a key influencer in protecting human security. With the UK holding the presidency of the G7 in 2021 and hosting the COP26 climate conference in Glasgow in November, a complete rupture would have been extremely damaging. The incoming Biden US presidency wanted a deal, unlike Donald Trump, a figure friendly to Johnson and arguably cut from the same cloth.

Fifth, the agreement does not mention defence, but EU vital interests demand close co-operation with Britain. Europe’s quest for greater defence relevance and capability within Nato depends on a close UK-France partnership. Toxic EU-UK relations would harm this alliance, delighting only Europe’s enemies.

Finally, UK research expertise is formidable. The deal keeps the UK inside Horizon Europe, the European Commission’s €95.4 billion research enabler. European universities and research institutes need the UK within their orbit. The research dimension extends to the European Defence Technological and Industrial Base, which needs UK engagement in civilian and military projects. This is far from guaranteed, but it is vital to any future European strategic autonomy that Britain fully engages with European research and development and defence-related projects.

In sum, the EU played a pragmatic game to protect its interests. The UK, after a flawed referendum, chose an ideological pursuit of a long-wished-for Brexit. While compromise is the usual EU modus operandi, the UK operates by winner-takes-all rules, epitomised by its first-past-the-post majoritarian electoral system.

Barnier, with advice from the president of the commission, Ursula von der Leyen, ultimately conceded more than many EU member states might have hoped. This, in the end, is testimony to the good faith and good sense of the union. A rancorous no deal would have been a terrible outcome, especially for Ireland.

The game is not over. There is much to play for and the union of 27 has a better hand, despite Johnson’s moment in the winter sun.