The Green Party is on 13 per cent in Dublin, well ahead of Sinn Féin and Labour 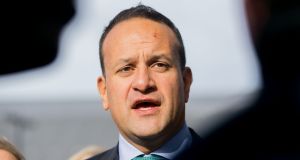 The Taoiseach’s rating is up 15 points to 51 per cent while the Government is up 11 points to 41 per cent. These healthy approval ratings appear to be linked to the fact that 60 per cent of voters are satisfied with the way the Government has handled the Brexit negotiations to date.

The poll was conducted in the three days after the highly publicised meeting between the Taoiseach and British prime minister Boris Johnson which led to a potential breakthrough in the Brexit stalemate.

Another plus for the Government is the poll endorsement it received for its handling of the economy in budget week. This was in spite of the fact that the vast majority of people felt the budget would make no difference to them or actually leave them worse off. The public clearly feels the prudent approach adopted by Minister for Finance Paschal Donohoe is the correct one.

The endorsement of Government strategy on Brexit and the budget has not led to an increase in support for Fine Gael, with the party remaining on 29 per cent, the same figure as the last poll conducted in May. However, with an election looming Fine Gael may take some satisfaction from the fact that it remains the largest party despite having been in second place in May’s local elections. It is particularly strong in Dublin and Munster which will be key election battlegrounds.

Fianna Fáil has slipped a point to 25 per cent but the party is well ahead of Fine Gael among the over-65s, who traditionally vote in large numbers. The decision not to increase the old-age pension in the budget may well have been a factor here.

The drop in support for Sinn Féin by two points is no great surprise given the party’s poor performance in the local and European elections, while Labour has slipped back one point to six per cent, emphasising the task it faces in recovering lost ground.

Support for Independents and others is up four points but this is mainly accounted for by a surge in support for the Greens who are now on eight per cent nationally. When the figures are broken down by region, the party is on 13 per cent in Dublin, well ahead of Sinn Féin and Labour who are both on seven per cent in the capital.

If the Greens can repeat this in a general election they should be able to come back to the next Dáil with considerably more seats than their current strength of two. That would put the party in a pivotal position in the formation of the next government.