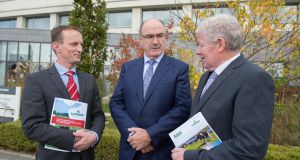 Lakeland’s takeover of rival dairy LacPatrick has been given the green light by regulatory authorities in the Republic and in Northern Ireland.

“The CMA found that the merger does not give rise to competition concerns in either the procurement of conventional bulk raw milk from farmers, or the supply of processed dairy products to customers,” the CMA said in a statement.

The regulatory authorities’ clearance was the last significant hurdle ahead of the proposed deal.

LacPatrick surprised the market last year by announcing it was seeking a strategic partner for the business amid a reversal in dairy prices globally. The business was also in debt after borrowing heavily to build a drier for powdered milk at Artigarvan, Co Tyrone.

In October, shareholders in both co-ops voted overwhelmingly in favour of the amalgamation.

The new entity, to be called Lakeland Dairies Co-Operative Society Limited, will be the second-largest dairy processor in Ireland, with a cross-Border milk pool of 1.8 billion litres, produced by 3,200 farms across 15 counties.

The new co-op will have a combined annual turnover of more than €1 billion. This will create competitive scale while ensuring efficient costs of operation, the co-ops said in the joint statement welcoming the regulators’ decision.

“The merger will help us to create efficiencies across our organisation which will enhance value and maximise available market returns for the benefit of milk producers,” Alo Duffy, Lakeland Dairies chairman, said.

His counterpart in LacPatrick, Andrew McConkey, said: “We look forward to the continuing future success of Lakeland Dairies as a fully integrated dairy industry player, creating efficiencies and further added value for our milk producers with enhanced global market access for our high quality dairy products.

“The merger gives our farmers the necessary security to make long-term business decisions and provides stability for continuing progress in dairy farming for the next generation,” he added.

A number of legal and administrative procedures still have to be completed to enable the new co-op to begin trading at the end of March. Until then, the two co-ops will continue to operate independently with each setting its own milk price.