Irish meat processor is owned by the Queally brothers, who also own Dawn Meats 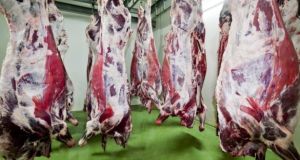 Arrow is one of the largest meat processors in the State

Pretax profits at one of the State’s largest meat processors fell again last year despite a continued rise in turnover.

It attributed the decline to currency fluctuations and a lower-than-expected valuation on group properties.

Despite the profit decline, Arrow paid out divdends of €7.5 million in 2018, versus €9 million in the prior year.

Arrow is owned by brothers Peter, John and Michael Queally who also own Dawn Meats, which has annual revenues of €2 billion and more than 7,000 employees in 12 countries.

The company said it had recently amalgamated its retail packaging and food processing into a new legal entity called The Culinary Food Group to improve brand awareness and streamlines processes.

Arrow employs close to 1,900 people with almost 1,500 of these working in production. Staff costs last year rose to €76.5 million from €75.8 million. Compensation for key management totalled €1.99 million, down from €2.02 million a year earlier.