A total of 98 teams and more than 300 contestants entered The Irish Times Debate this year, the oldest university debating competition in Ireland which has been running since 1960. 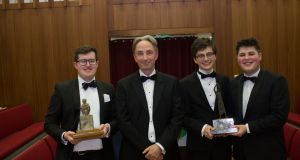 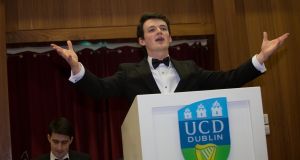 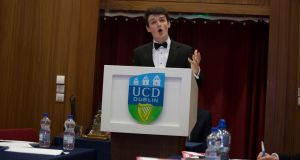 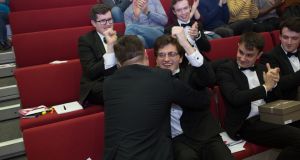 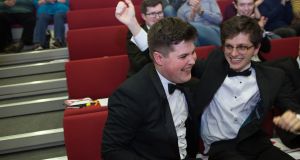 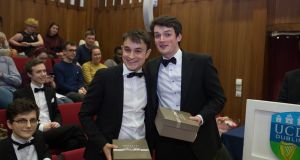 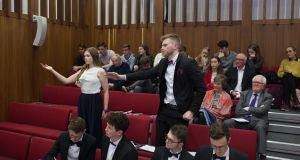 Opposition speaker and individual runner up Aishling Kinsella (UCD L&H) warned the audience, “we need to be aware when powerful states attempting to bully and lie to us” in an effort to get us on board. Photograph: James Forde

Students Daniel Gilligan and Ronan Daly from Trinity College have won the grand final of The Irish Times Debate 2019 on Friday night.

The winning individual speaker is Kevin Roche of King’s Inns. The winners will now be invited to go on a debating tour of the United States.

A total of 98 teams and almost 200 contestants entered The Irish Times Debate this year, the oldest intervarsity debating competition in Ireland which has been running since 1960.

The motion for the 59th final of the competition was: This House would rescind Ireland’s position of neutrality in favour of a European standing army.

Contestants from The Kings’ Inns, UCD, Trinity College and the Solicitors’ Apprentice Debating Society of Ireland were all represented among this year’s 12 finalists.

The black-tie event, hosted by UCD Law Society, was marked by frequent clashes regarding the status of Irish neutrality with a proposition claiming the status quo to be a sham.

His teammate, Ronan Daly, furthered this argument by saying “this debate is about the profound distance between who we are, are who we believe ourselves to be.” 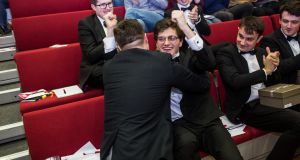 Opposition speaker Ross Merriman (UCD LawSoc), however, believed it was deeply unjust for the house to suggest we should ask parents to send their children to fight in another nation’s war.

He held that if the Irish people wanted to fight a war “we want that act to be one of willful engagement,” and not simply a state fulfilling an obligation.

Lonán Collins (Solicitors’ Apprentice Debating Society of Ireland) attacked the opposition’s argument as a relic of a bygone era.

In the past, Collins said Ireland’s decided to become a neutral state was influenced by Britain’s status as an imperialpower.

This, he said, no longer reflected the best course for Ireland, and we needed to insure ourselves against future crisis through further cooperation.

Aishling Kinsella (UCD L&H) runner-up in the individual speaker category, called on Ireland “to be aware of when powerful states attempt to bully and lie to us” about the need and consequences of war.

It does not matter, she said, if our neutrality was not perfect because most nations of the world believed it was, and perception is more important.

The debate also saw the finalists contest which side of the house was more moral in the actions.

Harry Higgins (TCD Phil), who alongside his partner Rory O’Sullivan were the runner-up team, countered that “we have an obligation to stand for peace, security and human rights,” worldwide, and only a European army could achieve that.