Respect not the only challenge for women's game 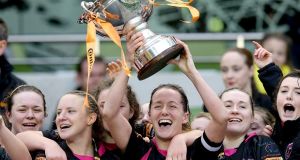 It’s November 8th; the WFAI Cup Final. Shelbourne Ladies FC vs Wexford Youths. It goes to penalties. The Aviva stadium rarely sees heart-racing soccer like this. Shelbourne have equalised in the last seconds of extra-time after Youths scored in the dying embers of the original 90. At one point, 129,000 people are watching the game on television.

Then something bizarre happens. Cork City and Dundalk’s men’s teams take to the vacant half of the pitch and begin warming up for the next game. After all, the FAI Cup Final between Dundalk and Cork City; the main event, kicks off soon. This curtain-raiser shouldn’t interfere. It’s not the first time the FAI’s organisational skills have been called into question.

Wexford Youths win the shootout, completing the double having won the league 3 months previously. Kylie Murphy, club captain, is rushed out to a small group of journalists in her full kit, soaked from the rain that had persisted over the Dublin 4 venue. “We all just feel unbelievable. It’s unbelievable,” she tells me, shivering. “It wasn’t technically the best game of soccer I’ve ever been involved in, but there were two teams who were never going to give up.” She’s freezing. A press officer puts a jacket over her. It’s little help. She apologises for not having more to say.

A dark cloud hangs over the eight-team Women’s National League. In theory, the league has been going from strength-to-strength since Peamount United became inaugural champions in the 2011/12 season. Raheny United (now Shelbourne) made the Champions League knock-out stage last season and Wexford were unlucky to not emulate that feat this year. Public interest is minimal and with incidents like the infamous penalty shootout, national media don’t exactly flock to games every week.

One rare case of the league producing a star was Stephanie Roche; a nominee for FIFA’s Puskas award for the most beautiful goal of 2013-2014. Since her nomination, crowds for Women’s National Team matches have increased dramatically. When I get the chance to interview Stephanie one-on-one, her influence is obvious. Schools around the country have taken the day off so that students can catch a glimpse of the star playing against Span. Ireland lose 3-0.

Hundreds mob Roche as I approach her after her brief cameo. Notably, no other player commands such attention. “I’ve said all along that the momentum has to keep going,” she tells me between smiling into iPhones and signing autographs. “We can’t have a burst of coverage for a month or two and then it dies down again.”

She’s been critical of the penalty shoot-out incident online. “I don’t think any team was to blame,” she says before looking around, to find an official listening. Considering her star power, the Association has to be careful with what she says. “It [the warm-up] was disrespectful in my opinion. It wasn’t Cork or Dundalk’s fault, they were told this would happen before the match… It was easily avoidable. They [the organisers] should have just put the [men’s] game back a bit.”

UCD Waves, Shelbourne and now Wexford Youths are visibly dominant in a manner that emulates famously uncompetitive competitions like the Scottish Premier League. While the battle between the three was won by two points last season, next closest were Peamount United, 14 points behind. Despite the perhaps unexpected rise of Wexford Youths, no other club in the league look set to upset the status quo this season.

“It’s a two-tier league now,” admits McQuillan, crestfallen after his team’s loss. “You have your good teams and you have your teams who are aspiring to be good teams. We need good teams at all levels… The whole league needs that in order to improve… I don’t know all the answers.”

But there is a plethora of positives around the sport here. Even if the majority are with one of the ‘Big 3‘, the players are certainly of a high standard. Since I conducted my interviews, Katie McCabe has left Shelbourne for Arsenal. The potential for development on a European level is evident. Twice since the League was founded, Irish teams have reached the last 32 in the Women’s Champions League.

Youth manager Will Doyle is a firm believer that the domestic product is on the rise. “I think the potential is definitely there at both male and female level. However, we need certain investment and we need people in the country to start getting behind the game here… The FAI are putting their money where their mouth is in regards to Women’s football and Continental Tyres are an unbelievable sponsor… The FAI need to keep pushing us to stay to a high standard. I believe there’s no reason we can’t keep competing at a high European level.”