Your guide to the weekend’s best sporting action

The main event is Ireland v Wales, but there’s the Fitzgibbon and Carabao Cup finals too 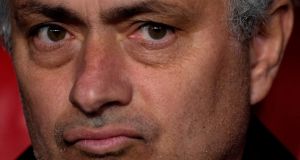 Ireland host Wales in the Six Nations on Saturday, there’s a Super Sunday in store across the water with Manchester United taking on Chelsea in the Premier League ahead of the Carabao Cup final between Manchester City and Arsenal. While in the GAA world there are some exciting hurling and football ties on both Saturday and Sunday - including the Fitzgibbon Cup final.

Rory McIlroy saved his worst ‘til last yesterday as an ugly double bogey on his final hole left him signing for a two-over 72 at Palm Beach Gardens. The clubhouse pacesetters are Alex Noren and Webb Simpson, who both opened with a four-under-par 66. Today he teed off at 12.45pm along with Padraig Harrington. Tiger Woods is in action at 5.35pm.

There is an absolute feast of rugby on the box tonight. At 7pm Munster host Glasgow Warriors in the Pro14, while at 7.35 in the RDS Leinster take on the Southern Kings. Garry Ringrose makes his return from injury, and all things going well he will be back in contention for the final two rounds of the Six Nations.

At 7.15 the Irish Under-20s will look to make it two wins from three against Wales in Donnybrook, after a thus far stuttering campaign.

While France and Italy - both winless so far in the Six Nations - do battle in Marseille at 8pm. TV coverage begins at 7.30pm on TV3.

The Winter Olympics ends this weekend, so if you want to load up on it before then, Eurosport’s coverage begins at 0.30am and runs ‘till 6pm.

The highlights of the day include the alpine skiing team event finals, the men’s 50km cross country skiing final and the men’s curling final.

The early Premier League kick-off is between Leicester City and Stoke City (Sky Sports Main Event from 11.30am), then at 3pm for Irish viewers only Burnley host Southampton, while over on BT Sport 1 from 5pm it’s Watford v Everton (5.30pm kick-off). The best of the English soccer is on Sunday but plenty there to get you through the day, and then at 7.45pm La Liga leaders Barcelona face their Catalan rivals Girona at the Nou Camp (Sky Sports Main Event from 7.40pm).

Connacht travel to Italy to face Benetton in the Pro14, looking to bounce back from last weekend’s defeat to Zebre (TG4 from 11.55am), before the last of the Irish provinces in action, Ulster, travel to Scarlets for a 7.35pm kick-off live on BBC2.

The weekend’s main event is of course Ireland v Wales at the Aviva. Joe Schmidt’s injury-hit team are putting their Grand Slam ambitions on the line against a Welsh side they’ve struggled against in recent years (TV3 from 1pm). Then following that encounter, the other remaining unbeaten team in the competition, England, travel to Scotland with the Calcutta Cup also at stake (4.45pm kick-off).

The PGA Tour’s Honda Classic event continues in Florida and the projected cut is currently three over par, and of the five Irish in action Seamus Power and Padraig Harrington will be under pressure to get inside that.

With Corofin waiting in the wings the second All-Ireland club football semi-final takes place between Slaughtneil and Nemo Rangers, with throw-in at O’Moore Park, Portlaoise at 4.30pm (TG4 from 4pm).

There is a repeat of last year’s senior men and women’s All-Ireland football finals as Mayo women’s host Dublin at 5pm (eir Sport 1 from 4.45pm) and the men’s teams do battle in Castlebar at 7pm (eir Sport 2 from 6.50pm). Over on eir Sport 1 there’s another juicy Division One fixture as Monaghan host Tyrone, coverage begins at 6.50pm.

The Fitzgibbon Cup final between DCU and UL is at 3pm, with TG4 streaming the match live.

This is DCU’s first ever time to reach the final of the competition and the Dublin university’s Alumni department have organised a free bus for graduates to the match in Mallow. They have also organised a complimentary lunch event (12.15pm Springfort Hall Hotel) to be co-hosted by graduates Richie Hogan and Seán Óg Ó’hAilpín.

Former GAA president Liam O’Neill, director of games development at the GAA, Pat Daly and former Clare hurler and Fitzgibbon Cup winner with UL Brendan Bolger will all be there to share their thoughts on the game.

Eurosport and BBC2 have all-day coverage of the Winter Olympics again on Sunday, including the closing ceremony.

It’s a hectic day of soccer action on Sunday, kicking off with Celtic’s visit to third place Aberdeen (Sky Sports Football from 1pm).

In the Premier League, Manchester United host Chelsea in a battle for Champions League places. As well as a chance for Antonio Conte to get one over Jose Mourinho again (Sky Sports Main Event from 1pm).

At 4.30pm (Sky Sports Football from 3.30pm) Arsenal will look to deny Pep Guardiola his first piece of silverware as Manchester City manager in the Carabao Cup final.

It’s all about the hurling on the GAA front this Sunday, the main match being Kilkenny v Tipperary (TG4 from 1.30pm) as the Cats look to build on their first win of the campaign last weekend.

Following that there will be deferred coverage of Cork and Waterford, as well as the Kerry footballers against an in-form Galway.

On RTE 2 from 2.30pm (kick-off 3pm) the Irish women’s team host Wales at Donnybrook, looking to build on the 21-8 win over Italy last time out.

The conclusion of the Honda Classic at Palm Beach Gardens is live on Sky Sports Golf from 6pm to 11pm.

1 Monica Seles: The warrior queen who could have been the best ever
2 Andrew Porter: Introducing contactless contact sessions
3 Premier League team news, statistics and TV times
4 Leicester seek to flatten their dismal curve and end season on a high
5 Whole New Ball Game: Rugby players could test public support over pay cuts
Real news has value SUBSCRIBE
Here is your handy guide to sport on television this week