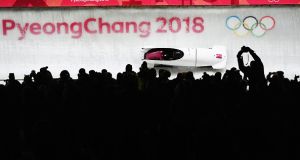 Nadezha Sergeeva, who finished 12th in the two-woman bobsleigh, has become the second Russian to test positive for a banned substance at the Winter Olympics in Pyeongchang. According to reports in the Russian media, the substance involved was trimetazidine, a stimulant usually used to treat patients suffering from angina.

The disclosure of another positive doping test comes just 24 hours after the Russian curler Alexander Krushelnitsky was stripped of an Olympic bronze medal.

The news will heap further pressure on the International Olympic Committee, who will meet on Saturday to decide whether the Russian team will be allowed to march under their own flag at Sunday’s closing ceremony.

As things stand, the Russian Olympic Committee is banned, although 168 of the country’s athletes have been competing in Pyeongchang under the Olympic Athletes from Russia banner Alexander Zubkov, president of the Russian Bobsleigh Federation, confirmed Sergeeva’s positive test to Russian newspaper Sport Express.

Zubkov said that the 30-year-old Sergeeva, who finished second in the European Championships in Winterburg earlier this year with Nedezha Paleeva, had tested negative in an out-of-competition test on February 13th but returned a positive test five days later.

Sergeeva was also among among several Russians who tested positive for meldonium in 2016, after it was put on World Anti-Doping banned list.

However she was cleared after Wada adopted an amnesty for athletes who had a low dose.

It is believed that 30-year-old Sergeeva tested positive at Pyeongchang 2018 after ingesting the banned substance in a nose spray. Trimetazidine is the same drug that China’s three-time Olympic swimming champion Sun Yang tested positive for in 2014 and served a secret three month ban.

Earlier this week, Russian coach Sergey Belanov said he believed that Krushelnitsky had been framed. “It’s just stupid to use a single dose of meldonium,” he said. “It does not work that way, the drug needs a course to restore the heart muscle.”

He added: “We live in a hotel in the Olympic Village. Every day a person of five passes through the rooms without us. There comes housekeeping, and completely different people: the grandmothers sweeping the floor, the young guys and girls in gauze dressings bring towels to change. Replace the bottle with another, with the contaminated substance – yes it is easy!”

Having called for the Russian Olympic Committee to consider isolating all of its athletes in the future to stop further sabotages he drew a strange parallel with Krushelnitsky’s case and chemical attacks in Syria.

“I have a complete analogy with what is happening in Syria with chemical attacks,” Belanov said. “How is it organised there? The gang, covered by the US army, brings chlorine and infects territory. Then the guys in white arrive, they take off all this nonsense primitively and rudely, although it is clear that everything is sewn with white threads.”