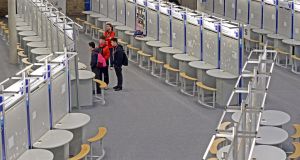 It didn’t take Karen Murray very long to prove her sporting hypothesis. Well before the latest political proposals about gender inequality, she got the sense that gap still remained, specifically in the GAA.

So, as difficult as it is to single out any research project being displayed at the RDS this week, as part of the BT Young Scientist and Technology Exhibition, Murray’s is certainly timely – and topical.

A student at Scoil Mhuire in Carrick-On-Suir, her project – Gender Inequality in GAA – set out “to investigate the extent of the lack of gender equality in the GAA community, via surveys, interviews and statistical analysis”.

The statistics alone were pretty damning.

“I contacted the GAA, and the women’s football and camogie association, to get attendance figures for their matches,” she says.

“And for the women’s game, there were a lot less figures available. Even within the organisation, they only had All-Ireland finals. They had no numbers for the smaller matches, which I thought was surprising.”

Murray’s project was personally motivated by the fact she plays football, as do many of her cousins.

“I have one cousin on the Waterford men’s team, and three on the women’s team, so I got some insight from both sides. But I also wanted to see what other people thought,” she said.

So she surveyed some of her classmates, showing them pictures of the men’s players and the women’s players.

“They were able to recognise most of the men, but maybe only one or two of the women. So there is definitely more to be done in promoting the women’s game. I know the LGFA are trying, but I also found when it comes to facilities and things like that, the men get first priority, and whatever they don’t want, the women get. And women do put in the same effort, but don’t get the same recognition.”

Their project – the correlation between success in an Olympic sport and participation in that sport following the Olympics – focused on the O’Donovan brothers, Gary and Paul, who now famously won Olympic silver in rowing in last August.

They admit they hadn’t heard much about the O’Donovan brothers prior to Rio, yet their interest in rowing is now significantly heightened – and in the wider context, that could be the springboard to further success in Tokyo 2020 and beyond.

“The motivation for the project was Paul and Gary O’Donovan winning their silver medals in Rio,” says Hickey. “It went viral all over the nation, and we thought about how much publicity that brought, and how that might increase people’s interest in rowing.

“It got us thinking about that. Elmarie and I both started camogie when we were eight years old after Rena Buckley came into our school to give a talk, having won the All-Ireland in 2008. She encouraged us to start. And it was the same with Robyn, who was inspired by Katie Taylor in 2012 in London, when she started boxing after that.”

“We also saw that in 2009 there was an increase in Ireland in rowing participation, even though they didn’t win any medals (in Beijing in 2008). But Britain won six medals, so maybe it was influenced by that.”

They also found some evidence already that the success of the O’Donovan brothers might well further Ireland’s medal chances in rowing in Tokyo 2020.

“We contacted their club, Skibbereen Rowing Club, and in the past few months the numbers are up – about 50 people have joined the club since the success of the Rio Olympics.

“But we think more can be done. The Minister for Sport, Shane Ross, should be prepared to put more money into sports when they are successful, not just rugby, soccer and GAA. And we think RTÉ should also show more sports such as rowing. And it’s also important to bring the O’Donovan brothers around to more schools to promote the sport.”