Seven Irish players who could be at new clubs by February 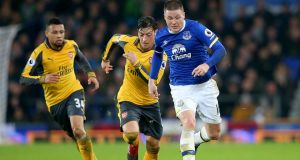 Everton’s James McCarthy is one of a number of Irish players who could move during the January transfer window. Photo: Getty Images

The Everton man has been the subject of speculation about a move away from Goodison Park for some time now and the imminent arrival of Morgan Schneiderlin from Manchester United could see it finally come to fruition.

The 26-year-old has struggled with injuries this season, making just seven league appearances.

While Championship sides Aston Villa and Newcastle United are believed to have made enquiries in relation to a loan deal, Everton are keen to make a considerable profit on the £13m they paid Wigan for the 26-year-old in 2013.

The Liverpool Echo reports that the club will only entertain bids in relation to a permanent move.

West Brom are the club most linked with the midfielder at the moment, potentially allowing him to team up with fellow Irish international James McClean.

Ireland’s Euro 2016 hero is somehow still plying his trade at Norwich in the Championship when there’s little doubt that he’s Premier League standard.

Crystal Palace, West Ham and Leicester are all said to be interested in the versatile left-back or left midfielder with Sam Allardyce recently naming him as a player he would like to bring to Selhurst Park.

However it is fellow Championship club Aston Villa who are reported to have made the latest bid, underwhelming as it is.

Norwich will not accept less than £10 million for the 24-year-old but it seems that the Birmingham side feel they can convince their East Anglia counterparts to let him go in return for Ross McCormack.

Needless to say that offer won’t go down well.

Salford-born but eligible to represent Ireland, Hogan is another player grabbing plenty of attention this transfer window. The striker who has 14 goals this season has been the subject of a number of bids by West Ham United, according to Sky Sports.

They claim that a third bid has been made in the last two days by the Hammers in the region of £12 million pounds after failing to meet Brentford’s valuation of the prolific striker.

Hogan has two Irish grandparents and featured in the Under-21 squad in 2014 but didn’t make an appearance.

Since moving to Peterborough from St Patrick’s Athletic, Forrester has gone from strength to strength and now captains the side.

Premier League side West Brom seem interested in signing him with the Sunday Independent reporting that scouts from the club watched the 24-year-old playing against Chelsea in the FA Cup at Stamford Bridge on Sunday.

Posh chairman Darragh MacAnthony knows that the club will lose the playmaker at some stage.

“Chris Forrester is the best midfielder by a mile in League One and plenty of big clubs are after him right now,” he said.

“Chris will go on and be sold for millions and millions and good luck to him if that happens because he has come to England, worked his socks off and turned himself into a top player.”

The 25-year-old has netted five goals in 24 appearances this season and has become a real favourite among Barnsley fans.

So much so that some Barnsley fans have created an online petition calling on the British government to make it illegal for the club to sell the captain. That’s probably a bit unrealistic.

However what’s not unrealistic is the idea of the Cork man moving away from Oakwell with Aston Villa – who seem to be in the market for every available Irish player – keen to take him on.

Hourihane’s contract runs out in the summer so a similar situation to that of Scott Hogan could unfold if Barnsley see the need to cash in on the midfielder.

The striker has been in and out of the Southampton team this season and looks like he struggles wherever he goes given the fact that the south coast side are his third club in three years.

While the reports of a move away from St Mary’s have quietened down somewhat in the last week or so, West Brom are still believed to retain and interest in bringing the 29-year-old back to the Hawthorns.

The 28-year-old Dubliner who has one cap for Ireland is currently out of action for club Brentford due to injury but there has been much speculation about him moving away, some of it apparently fuelled by Judge himself.

It was reported last week that the midfielder said he would rather leave the London club in the summer when his contract runs out, meaning that they would receive no fee for him. He has since come out and defended himself on Twitter saying that he made no such claims.

If Brentford are to sell him it would be better to do so now and make some money rather than miss out on millions by moving him on in the summer, but manager Dean Smith has come out and said that money-making is not a priority.