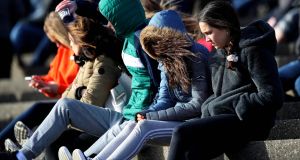 Three of Sunday’s five hurling league contests went ahead despite the stormy conditions - with Wexford’s win over Kilkenny proving the match of the weekend. “Wexford and Kilkenny played out not so much a league match as a Hell Week army exercise, wrestling with the conditions by wrestling with each other” - read Malachy Clerkin’s report in full here. Patrick Horgan scored two penalties as Cork defeated a plucky Westmeath side by four-points, and Brian Lohan’s Clare kept their unbeaten league run intact, with a comfortable win over Laois at Cusack Park in Ennis. The Division 1A clashes of Galway and Tipperary in Salthill and Limerick and Waterford at the Gaelic Grounds were both postponed. Tonight, in the Leinster Under-20 football quarter-final, Laois host Westmeath in O’Moore Park at 7.30pm.

Ireland will announce an updated squad for Sunday’s Six Nations clash against England this afternoon. It should see all or pretty much all of those 13 players released for Pro14 action over the weekend rejoin the 23 players who took part in last week’s two-day camp in Cork. Andy Farrell will confirm the starting XV and replacements on Wednesday. Gerry Thornley predicts only the one change to the Irish 23 - Caelan Doris to be named on the bench ahead of Max Deegan.

1 Restarting Ireland: When and how will we ‘get back to normal’?
2 Coronavirus: Another 17 deaths and 331 new cases reported
3 Tuberculosis vaccine ‘potential game-changer’ in Covid-19 fight
4 Mary Lou McDonald: This crisis shows that Sinn Féin was right
5 Dublin deserted: Coronavirus turns city into ghost town
6 What is Houseparty, the app everyone’s talking about – and not in a good way?
7 Stephen Kenny replaces Mick McCarthy as Ireland manager
8 Search for two missing members of Kennedy family treated as ‘recovery mission’
9 Coronavirus lockdown steps could remain into winter, says expert
10 Fintan O’Toole: Earth has a toxic virus – us
11 Three held after South Armagh gang steals ATMs in Dundalk
12 Lockdown living: ‘We’ve moved into a cabin so the kids can have the house’
13 International Space Station returns to Irish skies on Friday and Saturday
14 Covid-19: Cocooning elderly over 70 at risk of vitamin D deficiency
15 Belfast phone mast hit by arson after claims over 5G link to coronavirus
16 David McWilliams: We must loosen up on financing pandemic spending now
17 Irish woman in Sweden: No lockdown, little distancing, people still shaking hands
18 Coronavirus: What are the new nursing home measures?
19 The air is filled with birdsong now. It was always there, we just couldn't hear it
20 Doing the coronavirus rounds with Joe the postman in Dublin 3
21 Lewis Capaldi: ‘I’m not Justin Bieber or Ed Sheeran – I’m not getting chased down the street’
22 We need to cancel the Leaving Cert and give students predicted grades
23 Paul Flynn: how to cook the perfect potato rosti
24 Netflix has revealed its most-watched content. You might be surprised
25 ‘We’re fine up here, Ross. I just can’t imagine this thing coming to Foxrock’
26 Coronavirus: Situation in Ireland ‘misrepresented’ because of limited testing
27 The chickpea stew that broke the internet in the US is here. Give it a go
28 Matt Williams: The economic earthquake for European rugby is coming
29 Pat Leahy: Small parties seem intent on fleeing from government
30 Coronavirus is ‘no excuse’ for refusing separated parents access to children
31 Coronavirus anxiety keeping you awake? Here's how to get more sleep
32 The best little-known board games to keep all ages entertained
33 Coronavirus: European solidarity sidelined as French interests take priority
34 Simon Zebo: ‘It’s been tough not being able to put my hand up to play with Ireland’
35 Meet the couple who dashed to get married just before the lockdown
36 Goodbye leprechaun economics, hello another grim milestone
37 Movies to stream right now: 10 great thrillers
38 Coronavirus and carers: ‘I am so scared right now’
39 From hippie home to cool cocoon – Wicklow cottage gets French-style refresh
40 Seán Moncrieff: I’m sick of hearing this is the new normal
Real news has value SUBSCRIBE