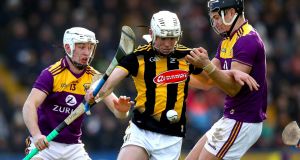 This was the most fun you can have with your long-johns on. Wexford and Kilkenny played out not so much a league match as a Hell Week army exercise, wrestling with the conditions by wrestling with each other. It was close quarters hand-to-hand stuff, with players throwing themselves into rucks like penguins chasing a bit of warmth. It was down and dirty and awful and glorious.

Davy Fitzgerald’s side came out on top by two points in the end, whereupon he turned and roared to an adoring home crowd as though the league, the All-Ireland, the Grand National and the Ryder Cup had been won. Mad thing is, every inch of it had been earned. Playing into the teeth of a hurricane, they had outscored Kilkenny by 0-5 to 0-2 over the closing 25 minutes, a display of almost reckless honesty that could only make their people swoon.

“It meant a lot,” said Fitzgerald afterwards. “Because seven points probably wasn’t enough at half-time. I felt we probably deserved to go in 10 or 11 up. I thought we needed a bit more. We had a chat inside at half-time about a few things. I asked them to show a bit more character and I think it got it in the second half.

“We didn’t win enough breaks in the first half; I think Kilkenny won most of them. We could have been a lot better than what we were. They won too many high balls from their own puck-outs. We discussed that at half-time. That we needed to address certain things. Which we did.

“I still believe in this crew, that they’ll fight their way back, no matter what they won’t give in. There was some big hits out there today. We got the result in the end.”

Every game has its context and this one was dictated by a breeze that Wexford appeared not to have made enough use of in the first half. They went in at the break seven points ahead and to get a sense of how paltry that felt, consider a pair of frees – one scored by each side 10 minutes apart.

The first, by Wexford centre-back Paudie Foley, was from 80 meters, well inside his own half on 10 minutes. With the gale behind him, it amounted to little more than a tap-over – a smooth swing to keep it straight and it cleared the bar with plenty to spare. The second, by Kilkenny freetaker Alan Murphy, was directly in front of the posts about 25 metres out. Ordinarily the most routine task in the game, Murphy nearly threw out his shoulder trying to strike it through the wind. Both carried the same reward but the difference in effort required on each side was oceanic.

And so it was hard to imagine that a 1-10 to 0-6 lead at the break was going to be enough for Wexford. It came as no surprise when they were caught and passed inside the opening quarter-hour of the second period. Billy Ryan speared a clinker of a goal past Mark Fanning three minutes after the restart and Richie Hogan roared into the game at full-forward, whipping a couple of shimmering points and looking particularly trim and lethal for the time of year.

The weather was beyond a joke at this stage, with horror movie dark clouds enveloping Wexford Park and the guts of half an hour still to play. When John Donnelly pinged the go-ahead point for Kilkenny on 51 minutes, the rain was horizontal and relentless. Short of developing a rolling maul, it was hard to see how Wexford might go about moving the ball up the pitch.

Fitzgerald played his cards to full effect. He sent in Lee Chin, Rory O’Connor and Diarmuid O’Keeffe off the bench and all three were central to arresting the slide and seeing the game out. On a day where clean possession was a Barry White kind of deal – first, last, everything – Chin was a magnet for the ball.

Paul Morris and Jack O’Connor both found ways to pull off impossible-looking shots into the breeze when silly wides might have sucked the energy from the Wexford effort. They got their lead back, pushing on to a two-point margin with 10 minutes to go.

Kilkenny were fading badly but could still use the wind to keep them in it. Paddy Deegan stroked over a nice score from his own 65 with minimal effort, Murphy potted another free. On 68 minutes, the sides were all square.

It was O’Keeffe who decided it, scuttling away from a midfield scrap to get himself into 40 yards of space behind the Kilkenny cover. With the whole of Wexford Park roaring at Rory O’Connor to find him, he beetled in on goal and put Wexford ahead. Another Morris free pushed the lead out to two and Wexford survived five minutes of injury-time.

Cue bedlam. And a hailstorm. A mad day to be hurling. But if you’re gonna do it, do it like that.