What to watch, where to go, who to bet on – your guide to the weekend’s sport 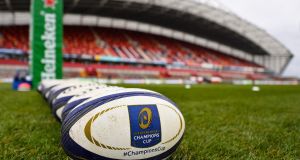 Munster are looking to continue their fine form and guarantee a home quarter-final at Thomond Park on Saturday. Photograph: Getty Images

For starters, what’s going on?

It’s a busy weekend of sporting action. The Champions Cup rugby heads the bill with three of the four provinces still very much alive in the competition. There’s Premier League football, there’s the Abu Dhabi HSBC Championship golf, Sunday will determine the two teams heading to Houston for Super Bowl LI, there’s Australian Open tennis action, racing at Ascot, we’re down to the knockout stages in most of the pre-season GAA competitions and the African Cup of Nations continues.

And what are the biggest events taking place?

What are the TV highlights?

There is no shortage of top sporting action on the tele to keep you entertained this weekend. Below is the day-by-day highlights, but if you’d prefer to see more of the action available to you, you can do so with our sports television guide.

Leinster are the first of the Irish provinces in Champions Cup action this weekend, they travel to Pierre Antoine to face Castres on Friday night (Sky Sports 2, kick-off: 7.45pm).

Having already qualified for the knock-out stages, a win would ensure Leo Cullen’s team a lucrative and advantageous home quarter-final.

There’s action then from the early hours on Saturday. Day six of the Australian Open runs from midnight right through to 3.30pm (Eurosport). Serena Williams and Rafa Nadal are both playing in the early hours, in their respective third round encounters.

Then from 8.30am you can tune into the Abu Dhabi HSBC Championship, where Darren Clarke and Paul Dunne are the only Irish in a field that includes Dustin Johnson and Henrik Stenson (Sky Sports 4, 8.30am-1pm).

At 12.30pm Jurgen Klopp’s Liverpool look to keep the pressure on Premier League leaders Chelsea as they host Swansea at Anfield (BT Sport 1).

A half an hour after that is underway, and Ulster wrap up their Champions Cup campaign at home to Bordeaux-Begles (Sky Sports 3, kick-off: 1pm).

There are five 3pm kick-offs in the Premier League, with Manchester United hoping that a win and results elsewhere can move them out of sixth place. They travel to the Britannia Stadium to face Stoke City (Sky Sports 5 *Ireland only).

The best of the day’s action though is later in the evening.

Munster know that a win over Racing 92 (Sky Sports 2, kick-off 5.30pm) will guarantee a Thomond Park quarter-final, and that a bonus point win would enhance their chances of achieving a top two ranking, and thereby the possibility of a home country semi-final.

Pep Guardiola’s Manchester City meanwhile will look to bounce back from last weekend’s humiliating defeat to Everton, as they host in-form Tottenham (BT Sport 1, kick-off 5.30pm). Who along with Liverpool are looking to close in on leaders Chelsea.

And if you opted for the rugby instead, or just happened to miss your team in action, at 10.30pm you can catch all of the day’s Premier League action with Match of the Day on BBC 1.

If all that isn’t enough for you, there’s more golf from California with the CareerBuilder Challenge live on Sky Sports 4 from 8pm 'till midnight.

Sunday’s action again begins with the tennis and the Australian Open action (Eurosport, midnight-3.30pm), before attention turns to Abu Dhabi and the HSBC Championship. Where perhaps Paul Dunne could cause an upset, or will Henrik Stenson or Dustin Johnson get their first wins of 2017? (Sky Sports 4, 8am-12.55pm).

Then, before the Premier League action gets underway, there’s a tasty Serie A encounter on BT Sport 1 between Juventus and Lazio (kick-off 11.30am).

Then at 2.15pm Arsenal host Burnley, before Antonio Conte’s Chelsea look to put the recent Diego Costa drama behind them with another home win, this time against Hull City (kick-off 4.30pm) - both games are on Sky Sports 1.

Sticking with the soccer action and Albion Rovers host Brendan Rodgers’ Celtic in the Scottish Cup, kick off is at 3pm with the game covered live on Sky Sports 5.

If you fancy some racing on your Sunday there’s action from Leopardstown, including The Coral Hurdle, live on RTE 2 from 1.30pm to 5.10pm.

The final four teams in the NFL are set and this Sunday evening will determine the two teams heading to Houston for Super Bowl LI.

And what can I actually go to?

There’s plenty happening this weekend if you fancy getting out and about - particularly in the world of GAA.

Tickets for Munster’s Champions Cup game on Saturday are sold out, although you can still get tickets for Ulster’s match at Kingspan Stadium. They will range in price between £20 and £44.

And if you fancy a late trip to France to see Connacht on Sunday, adult tickets at Stade Ernest Wallon are ranging in price from €19 to €70.

On Sunday there are 15 GAA games in all, the pick of the action being the O’Byrne Cup semi-finals, where Kildare should prove stern opposition for an experimental Dublin (Newbridge, 2pm). While Meath take on Louth at Pairc Tailteann (also 2pm).

In the Connacht SFL (round three) Roscommon host Mayo in Kiltoom at 2pm, while Kerry and Limerick also do battle in the McGrath Cup final (Gaelic Grounds 3pm).

In the McKenna Cup we are at the semi-final stage - with Tyrone taking on Fermanagh (Clones, 2pm); and Monaghan playing Derry (Athletic Grounds 2pm).

While in Munster there’s also some interesting hurling action as Waterford host Clare (Fraher Field, 2pm), while Limerick look to bounce back from last week’s seven goal drubbing against Cork as they face an improving Kerry at the Gaelic Grounds, 1pm.

Un De Sceaux is the hot favourite for the weekend’s biggest race, the Clarence House Chase at Ascot. He claimed this race with ease last year, and the Willie Mullins’ trained nine-year-old arrives in fine form - recently picking up his 11th career win at Sandown last month.

While in the 3.15pm Peter Marsh Chase in Haydock, Definitly Red is currently 4/1 and worth a punt.

In the Premier League Manchester City will know they can barely afford another defeat when Tottenham come to town on Saturday. Spurs are in fine form, fine goalscoring form too - and with City leaking four last weekend things are looking ominous for Pep’s team. A likely Spurs win here would be a fourth in a row for the London club against City.

As for the GAA, Tyrone are the preseason specialists. Going for six McKenna Cup titles in a row this year they should have too much for Fermanagh.

Kerry could cause an upset against Limerick in the hurling, while Kildare footballers should surely be able to see-off an experimental Dublin outfit. Meath meanwhile will be expected to overcome Louth, with wins expected also for Monaghan and Kerry (football).

In the rugby, Gavin Cummiskey is predicting a Munster bonus point win, a Leinster win, and for Connacht to lose in France and not qualify.