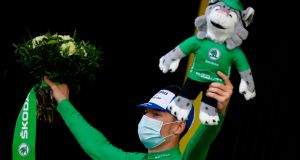 Ireland’s Sam Bennett celebrates retaining his green jersey on the podium at the end of 16th stage of the Tour de France. Photograph: Getty Images

From this morning a maximum of 200 people can attend outdoor sporting events as long as it takes place in a stadium with a capacity of at least 5,000, outside of Dublin. In the capital the figure is just 100. On Tuesday afternoon the Government revealed its six month Living With Covid-19 roadmap, and Malachy Clerkin’s Q&A breaks down all the confusing details. Although most sports organisations and fans were expecting more, the good news is unlike back in July and early August, the 200 refers to crowds through the gates only - “it’s just not as good as the good news that we had been given to understand might be in the post.” Seán Moran explains why the GAA must feel a bit like the grand old Duke of York, in the midst of this frustrating process of stadia being closed, then opened, then closed and now opened again. “A championship match is at least as much about the crowds as the teams,” he writes. “The phrase, ‘It takes a village to raise a child’ can rarely be more resonant than in the formation of footballers and hurlers.”

In his column this morning (Subscriber Only), Gordon D’Arcy is looking ahead to the weekend’s Champions Cup quarter-finals where Toulouse are primed to expose Ulster’s limitations: “considering Ulster’s overall form since the restart, Cheslin Kolbe, Antonine Dupont and Thomas Ramos must be licking their lips. Dan McFarland’s team are still on an upward curve but a reality check could be in store on Sunday because, working off the evidence to hand, they are some way off bringing a trophy to Belfast.” Saracens are hoping to end Leinster’s unbeaten season on Saturday, and their experienced winger Sean Maitland believes “it doesn’t get any better than playing Leinster at the Aviva . . . I know there’s not going to be any fans, which is a shame. We’ve played them in a quarter-final over there, then last year’s final, now the quarter-final again. I’m sure they have a lot of motivation to play us after last year. It’s a massive game, it’s European rugby, and it’s the only game that really means anything.”

1 How one couple’s weekend away resulted in 30 Covid-19 cases
2 Covid-19: College students on a break and middle-aged people in rural pub linked to large clusters
3 Taoiseach tells TD to ‘cop on’ over criticism of contact tracers asking about pubs
4 Netflix: 10 of the best new shows and films to watch in October
5 Miriam Lord: This Government is all out of ideas. Dial 1800 – Help
6 Leaving Cert Q&A: How did the errors happen and will students get new CAO offers?
7 The Comey Rule review: You actually begin to root for Trump
8 House asking prices rebound but will likely fall again, says MyHome
9 Fair Deal nursing home scheme and the family home: how does it work?
10 Coronavirus out of control in Britain, chief scientific adviser admits
11 Colleges may have to create 1,000 extra places after Leaving Cert errors
12 Plans for €2bn Dart expansion lure Bombardier to Dublin
13 Council set to abandon €20m Liffey bridge plans
14 Pharmacists to be allowed give flu jab in homes and cars
15 Food bank in Dublin’s working-class Bluebell feeding hungry hundreds
16 US debate format to be changed after disjointed first round
17 Two Portobello homes get the designer treatment
18 Pierce Brosnan’s Malibu mansion on the market for $100 million
19 TV guide: Pros and cons of broadcast television options
20 Bloody Sunday decision on soldiers shows limits of ‘truth or justice’ model
21 Funding crisis triggers HSE takeover of St John of God services
22 Irish food trade could slide by one-third if EU and UK fail to cut deal
23 How to deal with anxiety from Covid and other events that are outside our control
24 Joe Biden is dodging the culture war to focus on class – and he’s right
25 Miriam Lord: Another dog’s dinner as D’Arcy jumps on the gravy train
26 There may be trouble ahead for the housing market
27 Trump urges Proud Boys to ‘stand down’ after debate criticism
28 Indecisiveness led to home of The O’Rahilly being demolished
29 Tokyo Stock Exchange suspends trade after worst-ever system glitch
30 H is for hero: the origin story of Jack Reacher, a billion-dollar brand
31 Google tells workers to return to country where they are employed
32 ‘We’ve a world that works at odd times – then I came to Ireland and everything closed at 6pm’
33 Man United contact Barça over Ousmane Dembélé loan deal
34 Brexit: UK to pilot second Bill overriding withdrawal agreement
35 Online buyers snap up rural properties in one day auction
36 Dublin’s Diarmuid Connolly announces intercounty retirement at 33
37 Dave Hannigan: How Christy Ring arose the curiosity of American media
38 Covid-19: Impact will last for years, says US hospital group chief
39 Spain to lock down Madrid as cases of Covid-19 surge
40 Brexit could undermine how Northern Ireland firms do business in Britain, officials warn
Real news has value SUBSCRIBE