Ultimate guide to all of the day’s sport – Tuesday, December 27th

Douvan runs at Leopardstown, Liverpool take on Stoke and the darts returns 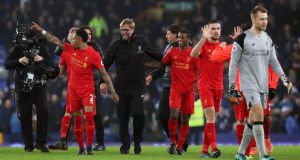 First off, what’s going on?

We have got racing in Leopardstown and Limerick as well as Chepstow, Kempton, Wetherby and Wolverhampton in the UK, Premier League and Championship action, one Pro12 match, an NFL clash, the return of the darts after a three day break as well as the Welsh Grand National.

And what are the biggest events taking place?

I’ve been out on Stephen’s Night and just got home in the early hours. Is there any sport for me to watch?

Well, what would you know, there is! The NFC East table-toppers Dallas Cowboys welcome the Detroit Lions of NFC North to the AT&T Stadium. That’s on Sky Sports 1 from 1am.

After that you best get some sleep. When you wake up it’s time to decide what to do with your day. Perhaps you’re still feeling the effects (hangover) from last night and want to wallow in self-pity on the couch. Perhaps you want to get out into the air and feel the thrill of the races or maybe you want to work off the effects of last night. Whatever you choose, we’ve broken it down for you.

A day on the couch: Your day will begin with some Championship action and can pass as research as you’ll be checking out Richie Towell’s team Brighton take on QPR. That’s on Sky Sports 1 at 12.30.

If that doesn’t take your fancy then you’ll have to make a choice at 1.0. You can either take in the racing from Leopardstown – which includes Grade 1 action in the form of the Paddy Power Steeplechase at 1.20 and the Paddy Power Hurdle at 1.55 – or the World Darts Championship at the Alexandra Palace in London where the second ound begins on Sky Sports 3.

At 2.35 it’s time for a quick switchover to Channel 4 for the Welsh Grand National from Chepstow.

At 3.0 there’s a choice of more Championship football as Derby take on Birmingham on Sky Sports 1, or the Pro12 clash of Ospreys and Scarlets on Sky Sports 2 at the same time.

That will take you nicely towards 5.15 at which point the one Premier League fixture of the day gets underway. That sees Jurgen Klopp’s Liverpool welcome Stoke to Anfield and is live on Sky Sports 1.

Then, for the evening it’s the darts and the big guns are out to play. Phil Taylor will take on Kevin Painter in a repeat of that 2004 final while Michael van Gerwen is also in action against Cristo Reyes. That’s Sky Sports 3 from 7.0.

A day out in the fresh air: Racing, racing and more racing. The Christmas festivals at both Leopardstown and Limerick continue on Tuesday with big-money Grade 1 action at the Dublin track while there are seven races further west.

Leopardstown is worth going along to just to see the incredible Douvan in action in the Paddy Power Cashcard Chase. At 1-5 (at the time of writing) you’d want to be betting big bucks to make any money but just seeing the six-year-old in action is a treat.

Action gets underway with the first race at 12.15. Tickets are available on the gate for €30 while students and OAPs pay €20.

If you live further west then the Limerick Races are the place for you with the racing beginning at 12.0. Admission on the gate is €20.

I want to exercise and work off my Christmas dinner: Sadly the options here aren’t in abundance. After the 25 Goal Miles around the country on Stephen’s Day, there’s just one left on Tuesday. So if you’re not in the vicinity of the athletics track at Sligo IT at midday then you’ll have no option but to go for a run yourself in the park.

As mentioned earlier Douvan doesn’t offer much value at 1/5 but why not go for that classic (not classic at all) horse racing-football combination and combine him with free-scoring Liverpool? While defensively shaky and despite a recent lull, Jurgen Klopp’s side still look capable of finding the net on a number of occasions every game. With odds of 2-1 at -1 it’s hard to turn them down. In a double wth Douvan €20 will return €72.

And, for the year that’s in it why not pay homage to James McClean’s winning goal against Austria with a dabble on Onenightinvienna in the Welsh Grand National at 16/1?

But wait, it’s Christmas so that means films and documentaries. Any good sports one on today?

There certainly are and what’s more they roll into each other nicely. So we start with Rugbaí Beo – Na Scéalta 2016 on TG4 at 7.15. It’s a review of what was quite a big year for Irish rugby with Connacht’s Pro12 win and the test victories over South Africa and New Zealand taking centre stage.

And then, at 9.30, take yourself back to when the country was gripped by O’Donovan fever with Pull Like a Dog at 9.30 on RTÉ One charting the Olympics silver medalists’ return to Lisheen and Skibbereen rowing club after their silver medal in Rio.