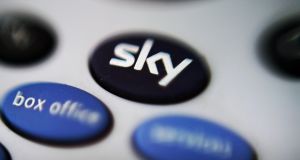 That Sky Sports News managed to keep a 24-hour-rolling-sports-news service going when there is next to no actual sports news to report says something of their dedication, creativity and powers of invention. Photograph: Leon Neal/AFP/Getty

There’s a category in The British Academy of Film and Television Arts awards (aka the BAFTAs) for the best ‘Reality and Constructed Factual’ telly, a gong picked up last year by the ‘I’m A Celebrity . . . Get Me Out Of Here’ people, thanks largely to ’Arry Redknapp’s contribution to the series.

Among the many things, incidentally, that we learnt about ’Arry during his time in the jungle was that he has never once in his life done a jigsaw, so if his wife Sandra wants to keep him occupied this weather she should probably purchase him a 100,000 piece puzzle of, say, a blue sky. That’d pass the time for him until this is over.

But watching telly this past week it couldn’t but strike you that there can only be one winner of the 2020 Reality and Constructed Factual telly award, the heroic efforts of the Sky Sports News people deserving of the highest of recognition.

That they have managed to keep a 24-hour-rolling-sports-news service going when there is next to no actual sports news to report says something of their dedication, creativity and powers of invention.

The other sporty channels have it easy, they can just repeat stuff, but Sky Sports News doesn’t have that luxury because, well, it’s a news channel.

Eir Sport, for example, filled part of their Sunday morning schedule with a repeat about a fella heading to Athy to fish for perch in a canoe.

“But the weather has other ideas,” said the ominous summary for the programme, and having forgotten to record it we’ll never know whether the weather prevented him from catching perch in his canoe in Athy. Unless they repeat the repeat, which is probably likely.

Sky’s football channel, meanwhile, was showing us repeats of the 2014 Football League play-off final between Burton Albion and Fleetwood Town, and, just to spoil us, followed that with an airing of the 2015 play-off between Southend United and Wycombe Wanderers.

Over on BT Sport, they were treating us to highlights of the clash between Oxford United and Leeds from the 1984-85 season. It was around this point that a colleague sent a somewhat plaintive text that simply read: “I’ve just finished Netflix”.

These are, then, especially challenging times for those who socially isolate themselves every weekend of the year to watch wall-to-wall live sport on their tellies – and now they’re facing the trauma of having to communicate with their families, walk the dog and such like, because there’s nothing else to do.

But nobody has risen to the challenge more than Sky Sports News.

Only once in the last week was there a suspicion that they were cheating by repeating an exceedingly olden story – ‘Paul Pogba’s agent hints that his client wants to leave Manchester United’ – other than that they managed to fill those 24 hours with fresh-ish news.

It was, of course, largely about postponements and cancellations, but they also brought us an abundance of Skype interviews with sports stars in their living rooms, even including the assistant coach of Turkish side Trabsonspor, and asked them all how they were filling their days. “Netflix, ” was generally the answer.

All we hoped for, but didn’t get, was a Skype shot of ol’ ’Arry doing his jigsaw puzzle in his living room, but maybe they didn’t want to subject their viewers to a torrent of expletives.

Paul Merson was roped in at one point to assist in filling a gap, the topic he was asked to discuss that of the fate of the current Premier League campaign. Should Liverpool just be awarded the title?

“It’s all very well saying Liverpool are 25 points clear, but if I played snooker with my mate tomorrow and I needed 25 snookers to win and he said ‘the game’s finished, there’s no point playing on!’ – I’d be saying, ‘but I could have won that!’”

Because Sky Sports News were so grateful to Merse for helping them fill a little bit of their 24 hours, they hadn’t the heart to tell him that football isn’t exactly the same as snooker, that Manchester City can’t really tuck the cue ball behind, say, Leicester, leaving Liverpool incapable of potting the black and sealing the frame.

Anyway, by then Merse had moved on to the problems that would arise if the season was cancelled.

“If they declare the season null and void, what are they going to do? Give everyone their season ticket back because the season never happened?”

That was a bit too Twilight Zone-ish, “the games you saw were just a figment of your imagination” kind of thing, so it was off to Twitter to see how everyone was coping.

And there was Aonghus McAnally on his guitar.

“For anyone who is missing the snooker – here’s the theme music!”

If only he’d put on Eurosport, they were airing a repeat of the Gibraltar Open snooker final from . . . not sure, but probably 1982-ish.

Nothing for it, then, but to go off and finish Netflix. And then find a jigsaw.