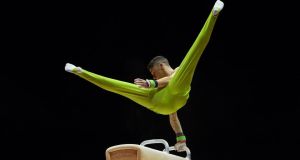 Ireland’s Rhys McClenaghan on his way to winning gold in the Pommel Horse at the European Championships at the SSE Hydro in Glasgow. Photograph: Andy Buchanan/AFP

There’s been a lot of talk in recent days about Johnny-come-lately bandwagoners attaching themselves like limpets to sports they never once showed any interest in simply because there was a sniff of an Irish medal in the air. And it’s so true, they’re a shameless bunch.

Any way, were you glued to the Pommel Horse on Sunday afternoon? This couch too, not least because we’d been assured that there was a sniff of an Irish medal in the air – a golden one too. And that was enough to have us flicking away from even the All-Ireland football semi-final lest we miss a moment of sporting history.

And once it was accomplished, we got out our inflatable green, white and gold bananas again, them only just deflated after the hockey.

Thanks to the mighty Rhys McClenaghan, we are now a nation of Pommel Horse diehards.

Although, Mary Murray, RTÉ’s resident gymnastics expert, suggested to Clare McNamara that she doubted we’re in any fit shape to actually take up Pommel Horsing. “Most of us can’t hold ourselves up in a chair never mind swing ourselves around the place,” she said. True, perhaps, but quite harsh.

Jerry Kelly and Colm Murray had talked us through the competition using a language with which some of us might not have been familiar, there being much chat about Russian Swings, Russian Circles, Triple Russians, Spindles, Magyars and something that sounded liked a wu-jee, or it could have been a woo-gee.

Rhys was third up out of the eight competitors, before him reigning Olympic and World champion Max Whitlock of Britain dismounting the horse, and not to drink milk either, in the middle of his routine, which apparently you shouldn’t do. That was him banjaxed, Jerry and Colm told us, and they sounded a little excited about it too.

Rhys swung himself all over the place, doing a bunch of Russian something-or-others, and the only reason we knew he’d done brilliantly was because the pitch of Jerry and Colm’s voices was rising with every Russian.

A score of 15.300 put him in the lead, with five Pommelers to come, and while respect, decency and fair play are all admirable things, be honest, you were hoping every one of them would fall off.

They didn’t, though, and to the uninitiated Croatia’s Robert Seligman looked quite a threat. But Colm told us he had been very “floppy”, and so it proved, he was done for.

The wait for the last fella’s score was interminable. “I thought I was going to need a defibrillator,” said Mary, but it was worth the wait. “It’s unbelievable, but it’s believable,” she said, having never thought she’d see the day until Rhys McClenaghan Pommeled his way on to the scene.

Up until then the Irish highlight of the week had been the big smiley head on Thomas Barr, and his Colgate smile, after winning bronze in the 400m hurdles, although Jakob Ingebrigsten soon became the only story in town after that 1,500m and 5,000m double.

“If he did the pole vault he’d win the damn thing,” said Jerry Kiernan, which is probably true – although he can lay off the Pommel Horse.

David Gillick caught up with Jakob and his brother Henrik, who took silver, making it a reasonably fruitful race for the Ingebrigsten family, their other brother Filip a bit useful at this running lark too.

“The dinner table must be interesting in your house,” said David. “Yes,” said Henrik, “it is loud and competitive”. You had to spare a thought for any Ingebrigsten not interested in running.

Come Sunday morning all eyes were on the marathon, Con Murphy telling us that there’s a Congressman in Contra Costa County in California (that line alone containing even more Cs than the GAA’s Central Competitions Control Committee) who responds to #AskGeorge questions on the tweet machine, meaning if he logged in during the marathon he’d have been bewildered because they were all being directed at George Hamilton.

Like the one about British marathon runner Tracy Barlow (“Do you think the cobbled streets on Coronation Street hampered her preparations?”) and the one about George’s snacking habits in Germany (“Did ye get to try some Currywurst?”).

George said he’d tried it once, but never again, his tummy feeling like it had just done a Russian Swing, Russian Circle and Triple Russian.