Liverpool back up the hype with West Ham hammering 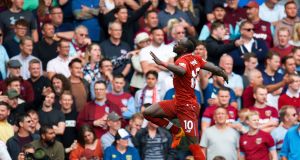 In the words of Jürgen Klopp there is an expectation on Liverpool to make the next step this season. The first step was thoroughly convincing. West Ham United were swatted aside at Anfield as Klopp’s team slipped back into the old routine with goals from Mohamed Salah, Sadio Mané and substitute Daniel Sturridge.

Liverpool scored four or more goals 14 times last season – a record bettered only once in the club’s history in 1895-96 – and hit their prolific stride in their opening game the new campaign as Manuel Pellegrini’s new-look side endured a punishing afternoon.

This was a seamless start to the season for Liverpool, who fielded two new additions in Naby Keïta and Alisson and continued where they left off at Anfield last term by dominating and demoralising their opponents. West Ham, with five of their summer signings in the starting XI, looked sharp and threatening only in flashes.

They spent most of the contest pinned on the edge of their penalty area and relying on a well-drilled offside trap to frustrate Salah and company. It succeeded early on, even though a breach always seemed inevitable. As inevitable as the identity of the man who launched Liverpool’s new campaign.

If there is a pressure on Salah to reproduce the phenomenal form that yielded 44 goals for Liverpool last season then he appears extremely comfortable with it. The Egypt international oozed confidence throughout pre-season and needed 19 minutes of the Premier League campaign to open his account. A simple tap-in from two yards was the end-product of a fine team goal with Liverpool working the ball out of defence and Keïta driving through midfield before releasing Andy Robertson on the left of the area. The full-back delivered his low cross to perfection and there was Salah at the back post to convert the first of many.

Lukasz Fabianski saved well when Trent Alexander-Arnold curled a free-kick towards his top corner. Georginio Wijnaldum prodded wide after Keïta had weaved his way through several challenges in the area. The new West Ham keeper also produced a point-blank save to deny Salah after another excellent Liverpool move around the box saw Roberto Firmino escape to the by-line.

The visitors had opportunities to lift the siege, and kept possession well at times under relentless pressure, but Marko Arnautovic dragged two decent openings wide. His first came from a long ball played over Joe Gomez by Angelo Ogbonna, and a deflection off the Liverpool defender brought a corner that Fabian Balbuena headed straight at Alisson.

His second stemmed from referee Anthony Taylor, who inadvertently blocked Wijnaldum’s attempted pass and was spared further embarrassment by the striker’s wayward finish. Rare opportunities that West Ham could ill-afford to squander.

Liverpool scored a second in first half injury time when the visiting defence switched off en masse. A Robertson cross was again instrumental, the left back floating a delivery to the back post after Salah’s attempt was blocked, and James Milner reacted quicker than any opponent to ghost in and pull the ball back from the by-line. Mané was one of three Liverpool players left unmarked behind the West Ham defence and diverted into an empty net.

Michail Antonio hooked an awkward volley over Alisson’s crossbar moments after the restart but Pellegrini’s attempts to turn the tide by introducing Robert Snodgrass for Declan Rice, then Javier Hernández and Andriy Yarmolenko, were to no avail. Liverpool continued to pour forward and, though a third goal was a fair reflection of their superiority, they benefited from an offside goal when Mané extended the advantage.

The Senegal international’s second of the afternoon owed much to the ingenuity and skill of Firmino, who cut across the West Ham defence before flicking a delightful pass into the unmarked striker. From an offside position Mané span and fired low beyond Fabianski. It encapsulated West Ham’s visit that their appeals for a reprieve went unanswered.

There was still time for Daniel Sturridge – or Ryan Fredericks – to add a fourth with his first touch of the game from Milner’s corner. Sturridge claimed he applied the final touch at the back post although the West Ham full-back also connected with a stooping header. Klopp just laughed at the substitute’s instant impact. The perfect start all-round. – Guardian service