TV View: Roy had his ‘told you so, you langers’ face on him 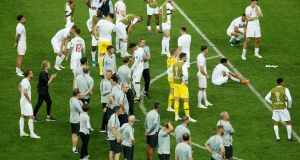 There was, literally, breaking news on the radio on Wednesday morning about light rain being spotted in one or two parts of the country, like it was Shergar or Lord Lucan, followed by chat about England playing for a place in the World Cup final. If you weren’t fully awake you’d have thought your vitamin C tablet was, in fact, a mind altering drug.

These have been peculiar times. There are small people out there, born since June 19th, 2014, who had yet to see an England A side lose a World Cup match.

Until Croatia went and demolished their hearts.

Football’s return home, much like a whole heap of Ryanair passengers, has been delayed, but you have to say, fanks for the memories lads, you made this World Cup a blast.

There had been some shock team news in the build-up, ITV relegating Slaven Bilic to pitch-side chats with Jacqui Oatley and Ryan Giggs, while Roy Keane, who returned to the World Cup having gone home (which would have been a first), took his place in the first IV alongside Gary Neville, Ian Wright and Lee Dixon.

Roy looked really thrilled to be there too, almost smiling once, but the other three were buzzin’. Lee professed to feeling nervous because he wasn’t nervous, blaming Gareth Southgate for his supernatural inner calm, but by the time they’d gone through the Croatian threat, the excellence of Perisic, Rakitic, Modric, Rebic and Mandzukic highlighted, he looked like he needed to vomit.

What would have, no doubt, calmed him was the message of support from Ricky Gervais’ dog and Micky Dolenz of The Monkees who declared himself to be a believer in England’s ability to see off Croatia.

Possibly until the end of time we will ask: Micky Dolenz? What the actual?

Over on RTÉ, meanwhile, Tony O’Donoghue had been posted to Molly’s Bar in Letterfrack, home of Harry Kane’s Da. He found a cousin of Harry’s to chat to but he didn’t seem to know him very well, had never spoken to him about the World Cup and dismissed the notion that Harry might ever have played for Ireland. Other than that, the piece went well.

Back on ITV Giggsie was sharing the top class analysis he has treated us to during the entire tournament - “It’s a World Cup semi-final, you’ll have to play well to win it” - while Roy followed his panel-mates’ ‘COME ON ENGLAND, WE CAN DO IT’ forensic dissection of the game ahead with an “if they show enough courage they’ll win …. but they’ve been in this position before and they messed up”. Hard fecker.

Off we went. And the bucket of popcorn was hardly opened when England were a goal up, Trippier joining Bobby Charlton and Gary Lineker on the list of England World Cup semi-final scorers, an addition that pre-Russia would kind of looked like ‘Van Morrison, Leonard Cohen and Olly Murs’. Now? Comfy in that company.

“THEY’VE JUST GOT TO KEEP THEIR EMOTIONS INTACT,” said Glenn Hoddle, his in the shredder.

England should have scored at least one more before half-time, the reason they didn’t largely due to Clive Tyldesley and Glenn losing the run of themselves, one short passing exchange in England’s rear-guard leaving Glenn in raptures, stopping just short of likening Maguire, Stones and Tripper to Carlos Alberto, Franz Beckenbauer and Bobby Moore.

Half-time. Should Croatia have had a penalty right at the end of the first half?

Roy: “No chance. Not in a million years.”

Eamo: “Yes, they should have.”

Luckily they were a channel apart.

An emotional evening, though. So emotional that Lee’s attempt to pay tribute to Trippier didn’t work. “He never fails to disappoint.”

But spirits were generally high, Nev, Wrightie and Dixo just about able to brush off Roy’s warning that England had been sloppy. “If they don’t finish this game off they’ll never forgive themselves,” he sniffed.

Second half. Croatia. GOOOOOOOOAL. “England’s confidence has been shaken,” said a gutted Clive. “’Opefully not stirred,” said Glenn. And then, lest we’d forgotten, Clive reminded us that when it came to Croatia “we’re talking top class players here”, when, in the first half, you’d have sworn he was talking about Accrington Stanley’s reserves.

And then Croatia hit the post and you sensed Southgate was about to be turnip-ised.

Full-time, 1-1. “I don’t know how you’re doing at home,” said Mark Pougatch, “but Ian Wright is slumped in his chair.” He was too. Nev and Dix a whiter shade of pale. Roy was sitting there with a ‘told you so, you langers’ face on him, ITV opting not to go over to Slaven on the touchline lest he further darken the national mood.

Extra-time. Just when we were thinking that that Mandzukic lad needed to be taken off, his legs no longer working, he only went and scored.

England huffed and puffed, but just couldn’t blow the Croatian house down.

“This game can kick you in the nuts,” Roy concluded, Nev, Wrightie and Dixo’s expressions suggesting they had just endured that very experience.

The main lesson from the night, though?

“What’s the use in tryin’

All you get is pain