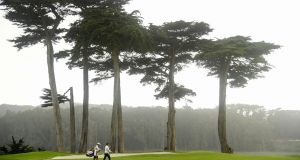 Rory McIlroy walks up the 16th fairway with his caddie, Harry Diamond, during the second round of the PGA Championship at TPC Harding Park in San Francisco, California. Photograph: Harry How/Getty Images

For three days of the PGA Championship, golf’s first Major of this discombobulated sports year, the world’s best players were introduced at the start of their rounds by a public-address announcer with no public to address.

It is a tradition, a chance to send players out onto the course with a wave of energy and admiration.

“Now on the tee, please welcome. . ,” the announcer said for each group at TPC Harding Park. One by one, the biggest names stepped up: Tiger Woods, Rory McIlroy, Brooks Koepka, Dustin Johnson.

One by one, there was silence, at most a few scattered claps from the tournament volunteers. When the players returned each day from their 18-hole outings, they found, instead of a warm homecoming and a green surrounded by fans, no one there, mostly. They were greeted by the same thing they had experienced the entire round: silence.

“I flat-out don’t like it – plain and simple,” said Paul Casey, among the leaders heading into the weekend. “Nothing I can do, obviously, but I miss it. I play golf at home with nobody around, and I much prefer it out here. This is why I love what I get to do, and it’s changed the dynamic of it.”

If a championship is won in a silent bubble, seen only through pixelated screens, does it count, at least as much?

The PGA Championship is the first major American sports event to test that question. The fan-free experience has been part of this summer’s sports schedule for weeks now, including in golf.

In the weeks ahead, the US landscape will be filled with playoffs and major championships performed without fans and in relative silence: the NBA and NHL playoffs, the US Open in tennis, the World Series, certainly the US Open in golf at Winged Foot next month and, in a few months, maybe even a Super Bowl.

But it is golf where the physical and visceral connection between athlete and fan can be as close and personal as any – up close, face to face, thousands standing in utter silence and then erupting in noise. No sport goes from crickets to cacophony like championship golf. And it’s not just a sound effect that is lacking.

The absence of fans has altered the competition. Some players, like Casey, complained that the course’s low energy was affecting their performance. Others noted that Harding Park’s fierce rough has not been helpfully trampled by the feet of fans. An unlucky few have lost balls that normally would not have gone missing.

On Friday, on the dogleg par-5 fourth hole, Xinjun Zhang tried to cut the corner with his drive but instead hit his ball closer to the fifth green, which in another year would have been surrounded by fans. The one or two officials nearby never saw it land; a search turned up nothing. Zhang was penalised a stroke and went back to the tee to tee off again.

The official scoring recorded his first drive as “288 yards to unknown”. Zhang bogeyed the hole and was rattled enough to bogey the next two as well, on his way to missing the cut by two strokes.

A day earlier, Justin Thomas had hit a drive into trees along the seventh fairway. No one was nearby, and after a search of the rough, the ball was presumed to have lodged in a tree. No one was sure. There were other oddities. When McIlroy missed the green on the par-3 third hole on Friday, a roving reporter accidentally stepped on his ball, hidden in the long grass, because there were no fans around the green who might have kept it protected.

Golf is the one sport that demands silence but really only becomes interesting when it gets loud. Sunday at a Major is an audible experience. It is Dustin Johnson’s fans at Bethpage Black during last year’s PGA Championship chanting “D.J.!” and inspiring Koepka to victory.

It is the wall of humanity following the last group up the 18th fairway at the British Open. It is the roar of the Masters, on No. 17 as Jack Nicklaus sinks a putt or Woods chips in, or on 18 as Phil Mickelson rolls in a putt to seal his first Major victory. None of that will be part of this year’s PGA highlight reel.

“If you look at players’ career-defining moments, in Majors or other events, the crowd plays such a huge part in that,” said Tommy Fleetwood, who is looking to win his first Major. “You look at the closing shots on the video footage and there’s massive crowds and everything. So that’s different.”

Instead of galleries, each group at Harding Park is witnessed in person by only a few people – a scorekeeper and maybe a couple of other officials or volunteers, reporters or camera operators. It is eerily quiet.

There is a hum from the generators that power the few electronic scoreboards and the television cameras. Trash bags at each tee snap in the breeze. The gallery in Caddyshack was bigger than anything Woods or anyone else has seen this past week.

The only fans are near the 12th tee, where curious onlookers along busy Lake Merced Boulevard can peek through the chain-link fence to cheer familiar faces. Everywhere else on the course, the only sounds are the clink of tee shots, the whoosh of irons out of the rough, the clatter of balls striking trees.

You can hear Mickelson slap his leg after a missed putt and sometimes hear him mutter to himself. “Gosh darn it,” he said on Friday after a shot off the third tee.

Without the white noise of galleries, players are hyper-aware of other golfers in other groups.

“If somebody nearby is hitting a tee shot or even landing into a green close to you, you can hear that, you’re so aware,” Jon Rahm said. “It’s just so loud. Noise travels so far here, and especially if you’re downwind. Every little thing, you’re going to be able to hear, right, so you just need to be just a little bit extra focused or aware that somebody is hitting a shot.”

The absence of fans has been a visual thing, too. On greens, for example, without a ring of fans to limit the field of vision, movements in the distance – a cart driving or someone walking 50 yards away – can be distracting. At times, caddies shouted to request stillness or quiet to unsuspecting people far away.

There was no reason to tip the cap or give a customary wave after a good shot or a made putt. Birdies were made without acknowledgment. Eagles were greeted with the chirps of real birds.

“You expect an explosion and people just going crazy, and it just feels a little weird to be the one yelling because no one else is,” Rahm said.

It is all disconcerting and disorienting. All of the usual ways of seeing or sensing what is happening are absent, or muted.

“There’s no feedback from anywhere else, so the leader boards are the only thing you have to see how you’re doing in a tournament,” McIlroy said. “There’s even no scoreboard holders, so you don’t even know how the guys in your group are doing.”

There are positives. Moving around the course has been much easier. But players still wish the fans were here.

“I know that we’re playing the PGA championship,” Jason Day said. “It’s a Major championship. It’s the first one of the year. It’s still just not the same.” – New York Times Service