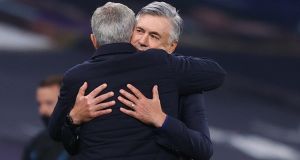 It wasn’t always pretty, but José Mourinho’s Tottenham ground their way to a much-needed three points as they beat Everton 1-0 in north London last night. A first-half own goal from Michael Keane was enough to give Spurs victory and move them up to eighth in the table, a point behind rivals Arsenal. Tempers flared at half-time between Tottenham captain Hugo Lloris and Son Heung-min - an incident Mourinho later called “beautiful.” The Portuguese, who recorded his 200th Premier League win as a manager, said: “I don’t like a team without communication. Probably what happened today at half-time shouldn’t happen there, it should happen just inside the dressing room, but I can promise you that my winning teams, we had big fights in the team.” Tonight there are a further three top flight fixtures, as Crystal Palace welcome Chelsea to Selhurst Park and Norwich travel to Watford (both 6pm), before Arsenal take on Leicester at the Emirates (8.15pm).

In this morning’s rugby column John O’Sullivan has looked at the vital part Ireland’s clubs will have to play if the sport is to make a successful return from the coronavirus crisis. A return to club action is scheduled for September, and with a congested calendar expected at provincial and international level, Division 1A and 1B of the All-Ireland League could provide a vital competitive outlet for both academy players and senior pros. He writes: “Irish rugby needs a vibrant club game to continue to produce quality in depth with an eye to replenishing the demands of provincial and national interests and their playing requirements, arguably never more so than now given travel restrictions and other issues thrown up by the pandemic.”

1 Covid-19 in Ireland: Colour-coded response set to replace phases
2 New Zealand considers freight as possible source of new Covid-19 cluster
3 Ireland among countries urged to consider reinstating Covid-19 restrictions
4 Brianna Parkins: My other half is trying to get me excited about spending a summer in Ireland
5 Donald Trump immediately targets Kamala Harris in campaign video
6 Moving in and out of lockdown is a recipe for economic disaster
7 Joe Biden names Kamala Harris as running mate for US election
8 ‘I’m afraid an intimate photo may be used to blackmail me or be sold to a porn site’
9 Standoff ensues over Minister’s unavailability at Covid committee
10 Michael McDowell: Free the Shelbourne Four from ‘woke’ activism
11 Let us pursue the coronavirus - not just watch its R number wax and wane
12 Covid-19 testing under scrutiny after meat factories and creche affected
13 Dwayne Johnson hangs on to title of highest-paid male actor
14 Madigan’s primary goal is Ireland caps after switch to Ulster
15 Seán Moran: It won’t take much before cancelling All-Ireland looks like a solution
16 Revised help-to-buy scheme opens for applications
17 AIB concedes Covid mortgage policy was ‘regrettable’
18 ‘I would consider every child born in this country as Irish’
19 Russia set to begin Covid-19 vaccinations within weeks
20 Seat’s new Leon: It’s now better than the VW Golf it’s based on
21 KBC Ireland chief feels heat from big tech in race for relevance
22 My sporting disappointment: Battered, bloodied, broken by The Wall
23 ‘No demand... because there are no people’ at well-known Dublin pub
24 Majority of parents believe children now face mix of classroom and home schooling
25 Experts examine less invasive Covid-19 testing for children
26 Maura Higgins: ‘I really hated it. Apart from that massage, the rest of it can kiss my ass’
27 An Garda Síochána criticised for Irish-language law non-compliance
28 Harvey Norman targets Irish property developers
29 ‘I’ve been sleeping with my girlfriend’s sister. I need help. What do I do?’
30 Glanbia sees sharp decline in earnings due to Covid-19 crisis
31 Irish Michelin two-star restaurant to sell kebabs and fries from takeaway trailer
32 Objectors stall production of enough timber for 1,000 houses
33 Dublin hospital warns HSE of ‘potentially disastrous’ fire risks
34 Covid-19: The fallout for families has been immeasurable
35 Lowest numbers in two weeks as one more Covid-19 related death and 35 new cases reported
36 The Irish Times view on resurgence of Covid-19 in Europe: adapting to the new normal
37 Different Strokes: Shane Lowry enters last chance saloon
38 AIB’s mortgage blushes; Cairn’s new home profits; and dog days at Arrow
39 View from Melbourne: Sporting fabric of the city suffering from second lockdown
40 Former Sinn Féin member apologises for anonymous social media abuse
Real news has value SUBSCRIBE