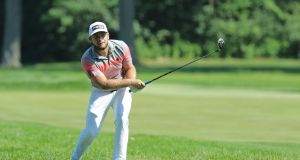 Tyrrell Hatton plays a shot during the final round of the Rocket Mortgage Classic at Detroit Golf Club. Photograph: Leon Halip/Getty Images

The hottest player on the planet this year is taking a break this week from the PGA Tour’s new tour stop, the Workday Charity Open at Muirfield Village which will also play host to next week’s Memorial tournament. No, it’s not Bryson DeChambeau who, as it happens, won’t be there either. The man in question? That’s Tyrrell Hatton, if you must know.

While DeChambeau’s bulked-up body has been the hot topic, and his win in the Rocket Mortgage Classic at Detroit Golf Club saw him outmuscle the course to claim a first tournament win in some 20 months, Hatton has been taking care of business in his own way since returning from injury this season.

And, would you believe, Hatton’s consistency – and hit rate – actually outdoes DeChambeau’s as the Englishman has a 100 per cent record of finishing in the top-10 so far this year, compared to the American’s 80 per cent.

Hatton finished tied-sixth on his return to action in the WGC-Mexico Championship in March and won the following week’s Arnold Palmer Invitational. Since the PGA Tour’s return, he has finished tied-third at the RBC Heritage and tied-fourth at the Rocket Mortgage Classic.

In picking and choosing where and when he plays in the restructured US itinerary, Hatton has decided to take a three-week break before returning to action at next month’s WGC-St Jude tournament in Memphis.

“[On returning], I decided that I was going to take it easy and see how it all played out with obviously the testing and everything at tournaments. At the end of the day, you’ve got to do what’s right for you and I’m comfortable with that,” said Hatton.

“Obviously, some guys aren’t playing [at all], they don’t feel too comfortable to come out. That’s their decision, that’s absolutely fine. I’m not quite in that ballpark but, with the schedule I’ve chosen, I’m not fully committing to play every week. So, I’m definitely taking it easy. But the fact that I stayed in the States during the quarantine period has allowed me to chose what events I want to play,” said Hatton.

DeChambeau’s approach has been different, playing four straight weeks since the tour’s resumption – finishing tied-third at the Colonial, tied-eighth at the Heritage, tied-sixth at the Travelers and returning to the winner’s enclosure in Detroit. But has accepted the limitations on his body wouldn’t extend to a fifth straight week and has opted not to play in the Workday, where the field is headed by Jon Rahm who, in the absence of Rory McIlroy, has the opportunity to go to number one in the world rankings with a win.

Graeme McDowell, who withdrew from the Travelers after his caddie Kenny Comboy tested positive for Covid-19 has completed his period of isolation, and returns for back-to-back weeks at Muirfield Village while Shane Lowry, still seeking to find form, is also playing. McIlroy has decided not to play the Workday but is expected to play in next week’s Memorial, a tournament hosted by Jack Nicklaus.

For DeChambeau, it will be just one week away from tournament play. Not that the week off means anything. On Monday, he travelled to Denver for a workout with Greg Roskopf, the muscle activist expert who oversaw the physical transformation which saw him add 30lbs to his body mass.

There were also plans for further work with NeuroPeak “doing some brain stuff to see how much stronger I can get before I come back to Memorial,” said DeChambeau of his plans, adding: “I’m full sailing as hard as I can to get as strong and as big as I can.

“I think the most important thing is that I’ve shown people that there’s another way to do it and there’s going to be other people trying to come up and do it that way,” said the 26-year-old American

“Whether it translates on the PGA Tour, I don’t think so. I think guys are going to play their game, they’re going to keep doing what they’re doing, trying to utilise their biggest tools in their toolbag to play their best golf . . . it’s going to take a generation for this to all evolve into something different. I really think there are going to be a lot more players down the road trying to hit it as far as they possibly can, and straight.”

DeChambeau, who moved up to seventh in the updated world rankings, also moved into an automatic place on the USA’s Ryder Cup team for the match against Europe which is still pencilled into the schedule for September although the ongoing speculation points to a deferral for a year.

1 James Ryan injury could open the door for Ryan Baird
2 Ken Early: Frank Lampard’s problems start at number one
3 Lockdown hiatus may afford way back for Waterford hopefuls
4 Man United in talks with Dortmund over €100m deal for Sancho
5 Series is gone but Kevin O’Brien and Ireland playing for ‘individual pride’
Real news has value SUBSCRIBE