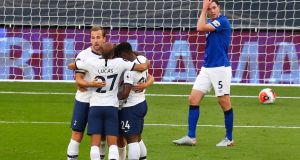 This is the wrong time of the season for grand architectural plans or extensive tactical surgery. No time for building blocks and moral victories. That moment may yet arrive for Jose Mourinho and Tottenham, if their chances of European football evaporate in the next couple of weeks.

That moment may be imminent for Carlo Ancelotti and Everton, whose defeat here now gives them a mountain to climb in that respect. But at this stage, with the days ticking down and the games coming thick and fast, the priority is very much on pulling out a result however you can.

And here it was Tottenham who emerged with the spoils at the end of a slightly drab game: not really by dint of their dazzling superiority, but through a deflected Michael Keane own goal in the first half.

To be fair to them, they defended well for the most part, began to find their rhythm after a shaky start, and had the two best players on the pitch in the spiky Giovani Lo Celso and the deft Harry Kane, who had little sight of goal but was Tottenham’s most creative presence in a team that still misses Christian Eriksen more than it would probably let on.

This is still not a happy ship, as evidenced by the sight of Son Heung-Min and Hugo Lloris having to be separated as they walked off the pitch at half-time. Too often they look one-paced and flat-footed when they try to force play, but as Everton came forward in the second half, they looked well-drilled on the counterattack.

Meanwhile, Ancelotti’s Everton continue to blow hot and cold, their horrible recent record against Tottenham – no win since 2012 – now continuing into another season.

It had been a scrappy and concussive first half, adorned by a fittingly scruffy Tottenham goal in the 24th minute. First Son had a shot blocked, then Kane, and finally the loose ball rolled towards Lo Celso 12 yards out, whose shot that was heading well wide before hitting Keane and looping past Jordan Pickford. For Tottenham, who had looked so laboured to that point, it was the equivalent of the drunk stumbling home up the garden path, trying every key in his pocket and finally falling in through a downstairs window.

Still, for Lo Celso it was a reward of sorts for another pleasingly waspish start. He had already begun with malign intent, taking just six minutes to square up to Richarlison for the first time, winning the ball comprehensively from Tom Davies, spiriting past Mason Holgate on a quick counter and forcing Holgate to injure himself in the process of fouling him. In a midfield battle defined by Everton’s enterprising four against Tottenham’s snappy three, Lo Celso was often the difference.

Their strategy was sound enough: press high, move it forward quickly and try to catch Tottenham’s back four on the turn. Holgate pulled off one defence-splitting pass between Serge Aurier and Toby Alderweireld that Lucas Digne couldn’t quite control. André Gomes forced Lloris into a hasty headed clearance with another searching long ball. But with the exception of Richarlison’s wicked shot on the stroke of the break, flashing just wide as Eric Dier simply stood and watched, they offered disappointingly little.

The introduction of the Liverpool-born teenager Anthony Gordon at half-time, replacing the disappointing Alex Iwobi on the right of midfield, briefly got Everton going again. One of the club’s standout performers since the resumption, Gordon offered as much in attack as defence: trying a shot from distance, offering an extra screen against Lo Celso, sliding in satisfyingly on a flying Ben Davies.

But as the second half progressed it was Tottenham who began to look more threatening on the counter, hunting out the spaces that Everton were leaving behind them as they tried to force the tempo. Son had a trio of decent chances: one set up by a brilliant 70-yard long pass from Alderweireld, one a curling shot that went just wide, and one set up by a neat flick from Kane, who was catching the eye more with his link-up play than with his goal threat.

An auspiciously-timed drinks break and the substitution of Bernard for Gylfi Sigurdsson threatened to swing the momentum back in Everton’s favour, as Lucas Moura clumsily fouled Tom Davies 20 yards out and Dominic Calvert-Lewin almost surprised Lloris with an audacious back flick.

For a while, as the blue shirts began to swarm forward, Tottenham’s nerves threatened to get the better of them. Ultimately, though, they saw out the game comfortably enough without ever really threatening to make it safe: using their substitutions to take the sting out of the game and emerging with a gnarled, grizzled three points. – Guardian