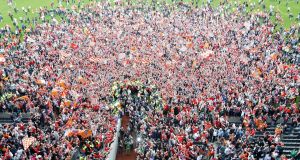 Armagh fans spill on to the Croke Park pitch after their win over Tyrone in the Ulster SFC Final replay in July 2005. Photograph: Donall Farmer/Inpho

Ulster GAA is looking at a €2 million shortfall for this year. With coronavirus wrecking sports events, the province’s championship schedules, published as part of Croke Park’s redrafted season at the end of June, will come too late for this financial year, which ends in October.

“Whatever we got from the Ulster club championship last year and the McKenna Cup this year was more or less our income for 2020 and that unfortunately will be it,” said Brian McAvoy, chief executive of the Ulster Council. “We’re going to take a massive hit because there’ll be no championship in this financial year. A big loss. Our income could be down as much as €2 million on last year.”

The provincial club championship is gone for 2020, scrapped to make way for the intercounty equivalent. Income generated by a speeded-up Ulster draw from October 31st to mid-November will be important to the council because it’s a discretionary fund.

“Our own major income stream – and okay, there’s sponsorship but you’re losing some of that too – is people coming through turnstiles and it’s money we have discretion over,” said McAvoy. “With coaches and that sort of funding, it’s money in and money out again so there’s no discretion.”

Ulster, like the rest of the GAA nationally, is concerned about the public health environment and its impact on the schedules and for McAvoy, there’s no guarantee that the intercounty season can go ahead as hoped.

“Not at this stage. You’d be hopeful but am I 100 per cent certain that there’ll be an Ulster championship starting on October 31st? No, I’m not. Nobody can be.

“Coming out of lockdown is possibly the most vulnerable stage because you don’t know what the outcome is when pubs and restaurants are reopening, businesses are back and air travel. All that increases the risks so you just don’t know.”

There were further complications for Ulster GAA dealing with the different jurisdictions in the province but McAvoy describes them as “more of an irritant”. One disruptive matter, operational at the moment, is the inability to stage challenge matches across the border but it’s temporary.

“We’re lucky there has been a fair degree of synchronisation North and South, even though things are slightly different.

“The only issue which has been a factor to date is outdoor crowds. The South can have 200 but we can only have 30 and the last weekend was the first time that it became a problem in that you can’t have a challenge game in the Six Counties.

“Now there is agreement that team sport can be played competitively outdoors from July 17th so that commitment is there, so at least we’re on the same page in terms of official start-back dates. So we’ll have competitive matches back at the same time but just there’s a wee anomaly in the meantime.”

The major impact throughout the GAA will be the loss of funding for capital spending. Casement Park in Belfast is the highest-profile project but Croke Park is committed to making a contribution to that. Ulster Council had been looking at the possibility of moving into new offices.

“It won’t help with one of the things we were looking at – a new headquarters for the Ulster GAA because we’ll have to factor a lot more into consideration. Cash reserves will keep us going this year but GAA puts back 84 cent in every euro and that’s going to be hit.

“There will be some savings now that we’ve learned to use new technology for meetings. Do we need to bring people from all four corners of Ireland and that would save money and be good for the environment as well.”

One of the challenges for all provinces will be the numbers allowed to attend the championship matches when and if they get up and running. At present there is a limit on outdoor crowds and even though that may be relaxed, as long as social distancing remains the norm, venues will be able to hold little more than a quarter of their normal capacity.

There has been discussion of Croke Park being used by provinces other than Leinster. This happened previously in 2005 and 2006 when the Ulster final was played there to accommodate the crowds.

McAvoy says that it’s too soon to make arrangements for championship venues until there is greater clarity about permitted attendances.

“We did look at venues but it’s too early yet. We’re interested in looking at Croke Park but Croke Park can’t be used for everything because you’ve competition from all the provinces. Munster are slightly better off with the new Páirc Uí Chaoimh, Thurles and the Gaelic Grounds but the other provinces are much the same – when you take Croke Park away, Leinster the same.”