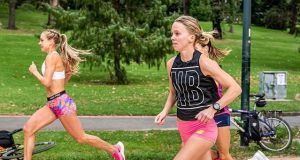 Genevieve Gregson and Sarah Billings set the pace with Sinead Diver just behind during The Tan record attempt in Melbourne. Photograph: Riley Wolff

Down here in Melbourne the groups of runners out training have been gradually diminishing. After breaking into smaller groups at first, at different locations, then into pairs, everyone is now running solo within the short distances from their home each day.

For the Melbourne Track Club, there was one last roll of the dice at the Botanical Gardens last week: a record attempt around the perimeter of The Tan, the locally famous running track of 3.82km, including a 500m steep incline within the first km. It may well prove one of the last record attempts of the year.

When the Olympics were finally and officially postponed last week it felt like there was a huge sigh of relief across the world. As much as we’d all miss the excitement and build-up to Tokyo this summer, deep down everyone knew that with each passing day there was less and less chance that any global event could start on July 25th.

With that the holding pattern ceased, and each athlete trying to stick to their rigid routine was all of a sudden left wondering: what next? There was no urgency to decide, but at the same time many are still left wondering how the postponed 2020 Olympics will play out into 2021.

As much as there was relief, there was also a huge letdown. Especially for the many athletes who had wintered well and put in months of base training, primed and ready to launch at the next available race. What now?

There was time, just about, for one latest record attempt on The Tan. The start/finish line has a leaderboard with the top-10 names and times for men and women listed on a post. Genevieve Gregson, Australian record holder and Olympic steeplechase finalist in 2016, decided she was going to see if she could be one of the few female athletes to dip under the elusive 12 minute mark, and maybe even break the official record from 2006 set by Sarah Jamieson, the Australian Olympic 1,500m runner and 2006 Commonwealth silver medallist.

When I first came to Melbourne in 1995, I used to run around The Tan every day. I know I have a few fast times from back then, and I’m sure I was under 12 minutes, but not being a local it never quite registered in the easy recall section of my brain. I need to look up my old training diaries, which are all back in Cobh, so that will have to wait until later in the year when hopefully things get back up and running again for everyone.

This was also a last training session for a select few athletes; Genevieve, along with Sinead Diver, who was preparing for the London Marathon until it got postponed, plus a pacemaker for the first km, Sarah Billings. I was asked to come along on the bike and lead the way, ringing the bell to help clear the path of any dog walkers or people out for their daily exercise.

Word also crept out to a few journalists and there was a photographer and camera crew capturing the action from a car on the perimeter road, plus another cyclist with a camera also. It was just an ordinary training session, but with a little bit of extra hype, chasing some reward for the months of training that were now going to have to be stored-up in the vault until any sign of a race in the coming months.

There was plenty of space for the girls to spread out and keep their 1.5-metre distance apart, working together but not near. It’s amazing the buzz and lift that athletes can get from a session with a difference – and the coaches, one official timekeeper and even the press, who were looking for any bit of news when the current sports stories aren’t really about any active sport.

It lightens the day and the mood when you have one last hit out, knowing that everything is about to shut down as race after race gets cancelled. Even though the Olympics are looking at a July 23rd, 2021 starting point there is no indication when any events will get started up again to help prepare.

So this last training session and record attempt delivered all we wanted and more: Genevieve ran 11:54, taking three seconds off the previous record, and Sinead was not far behind in 12:08, moving to fifth on the all-time lap of the Tan best times for women.

It was just the buzz and excitement everyone needed, celebrated almost as if a world record had been broken, a back page sports story too. When the first Tweet was sent out all the local TV and radio stations wanted to come down and spread the word before stage three lockdown came into effect, and everyone would be running from home.

And that’s where it is now. It feels like everyone is on a remote training camp and not just the Olympic athletes but everyone who is working from home.

The thing about working from home is that there are so many distractions all around, even when you set up the exercise mat to link in with Zoom Yoga. I had no idea what Zoom was before this week, and as I stretched out at ground level, all I could see was dog hairs and dust, a few cobwebs in the corner, and the things you never see when running in and out during the normal busy lifestyle.

Then when outside, trying to keep pace with my daughter Sophie on her circuit session, all I could see was a climbing weed taking over the whole back fence. It blends in nicely but I know if I don’t attack it now it will be out of control.

When you focus on the present, and not worry about what might have been, it’s easy to forget that this week I should’ve been in Cobh preparing for the third annual Cobh 10-mile road-race organised by Ballymore Cobh AC. It was a huge disappointment when we had to cancel but the preparation and daily runs still continue for many, as one day we will get there and run around the streets of Cobh together and appreciate even more what we have started to take for granted as we fall into the same daily routines and rituals.

For now we are left looking forward but there are no deadlines. We simply need to remember that exercise and training is not just for races and events but to keep the mind and body active, fit and healthy, and exactly where we all need to be at this time.