Judy Murray fighting for the game she loves on several fronts 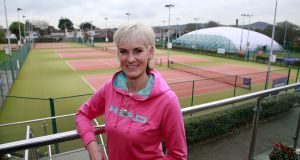 Judy Murray: “There is talent everywhere but it’s not always spotted. You need to create opportunities.” Photograph Nick Bradshaw

Sutton LawnTennis Club. Green carpet swards and a giant dome. Judy Murray is walking around having her picture taken; on the balcony, outside the giant dome, with some members. . Whir, click.

This is no time to quibble. Judy, smiling and steely, sprung Andy and Jamie on the world of tennis and when Wimbledon surrendered to him in 2013, we should know that he changed a British sporting mindset.

It had until then been a 77-year long, part banshee wail, part eulogy for Fred Perry, his statue in the shadow of Centre Court emblematic of a once vital tennis nation. Supplanted by Murray, Perry’s name would never again be used to thrash the backs of British players who couldn’t punch through.

Judy smiles and steps through the clubhouse door. Uber Tennis Mom, tanned and athletic. A healthy 57-years-old. There is no other in the modern game, outside of Oracene Price, the mother of Serena and Venus Williams, whose children have carved out such a sizeable chunk of tennis action for themselves.

The body of work: Andy now a two-time Wimbledon champion, US Open winner and Olympic gold medallist. Older brother, Jamie a three-time doubles Grand Slam champion and formerly ranked at the top of the world.

Judy is a woman of parts. A former Federation Cup player, a coach and pundit, a campaigner. She is measured and articulate and has expended energy on a number of projects. Getting girls into the game in the 21st century is one.

“I have a big thing about that,” she says. “Across the UK we are outnumbered by something like 80-20 in terms of male coaches to female coaches.

“I launched a program a few weeks ago with the LTA (Lawn Tennis Association) to combat the problem of the UK not having enough female coaches and female participation dropping significantly over the last few years. There’s about a 14 per cent drop off.”

Her fights are on several fronts. In Scotland, and Ireland is no different, surfaces are not ideal, talent pool is shallow, coaching expertise thin and real ability not identified.

Champions have to be shown a path. But she believes that circumstance and determination in players are powerful driving forces.

She talks of Andy and when he was a teenager. How a chance game of social racquetball with a young Spanish player called Rafa Nadal entirely rewired him, changed his attitude. It was her youngest son’s fire that then triggered a move to Barcelona and ended any thoughts of professional football.

“Andy went to Spain when he was 15,” she says. “And he was prompted by Rafa. He was playing racquetball and Rafa was telling Andy how he trained in Majorca and how he was hitting with Carlos Moya, who was the world number one at the time. How Rafa played on clay, the sun shines, had lots of people to play with blah blah blah.

“At the time Rafa was playing for Spain and Andy was playing for Great Britain in the final of the European team championships so they played all the tennis and then went off and played racquet ball and that was when they started talking.”

Nadal is a year older than Murray and then was engaged in an altogether more serious tennis world. He played on consistent surfaces, in good weather and had what Judy calls “quality sparring”.

The boxing term is apt and perhaps comes from Andy who is a boxing fan. On clay the ability to withstand the physical demands becomes defining for top players and Nadal with nine French Open titles is the master. Murray has one Roland Garros final. On that surface Rafa has the step.

“Andy came back and it was ‘agh. . . I’ve just got you and my brother to play with at the University. I want to go to Spain. I’m not doing enough.’”

“That is when we started to look for places for him to go. But it has to come from within. It has to come from there. Andy was still playing a lot of football at that time and that chat with Rafa was what opened his eyes. That was a big moment to go ‘I want to go to Spain.’ And he did.”

“There are similarities between Scotland and Ireland in that a lot of our tennis is played out doors on artificial grass courts,” she says. “In my opinion it’s the worst possible learning surface.”

She explains the playability of it changes depending on the weather. It doesn’t matter if you are playing and it’s dry because the courts are still wet. The moisture then comes off on the balls. The balls become heavier and fluffy.

So they change physically and you have to adapt. When the sun dries the carpet, the sand comes to the top. The court then becomes slippy and it becomes fast and techniques have to adapt again.

“I see that, in terms of producing players, as a big issue,” she says.

“I don’t know if Andy would have been able to develop in the same way if he had not gone over. He was mostly training on hard courts but indoor. Our weather is so bad indoors takes out sun, wind, humidity, all of the things you need to get used to.

“Also at that time you had quite a small pool of players to practice with, who you had been practicing with since you were eight years old. You need like-minded people, that variety of sparring partner.

“Unless you develop the big squad situation, which is another challenge to Scotland and Ireland...you need the numbers or else your one or two extra special ones need to go somewhere else to find it.”

Recently under a code backed by funding bodies UK Sport and Sport England, the carrot gave way to the stick. Boards of sports backed by public money must comprise at least 30 per cent women or men or funding will be cut.

Ireland isn’t so ballsy with Minister Ross declining to go in with the sabre flashing. No sanctions required was his mood.

Ireland may have a first Wimbledon champion before sports organisations self-regulate.

“I’ve been in a number of debates about sanctions or not sanctions,” she says. “I would say that in the 25 years I have been coaching things have not really improved.

“Largely if we don’t have sanctions I don’t think women are going to get the chance. It’s my experience that women will look after the needs of women and girls simply because they understand better.”

A foreign academy is not an unhealthy place for a teenage girl, she believes. It is a boarding school that gives tennis lessons instead of maths or geography. Personality is the key.

There is talent in Ireland but in certain instances it requires looking beyond the Tennis Ireland academy and taking a punt, as Murray once did from Scotland’s Dunblane, no tennis stronghold, can have profound effects.

“You need your role models for the profile of the sport, for the buzz, the excitement,” she says. “Not just to look at Jamie and Andy. But Colin Flemming, Jamie Baker, Elena Baltacha. to say they used to train in the same place as you. Anything is possible.

With that positive iteration it is a homemade Sutton Lawn Tennis Club bun and cup of tea. Standing up in a side office beside a photocopy machine.

Andy’s current wealth at 29-years-old is over €59 million in prize money alone.

But that’s not at all what the day in Sutton is about.