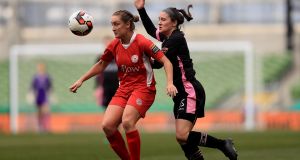 It is a little after seven o’clock and the runners are still out on the track at Santry Stadium as the Shelbourne players begin to arrive for training.

They start at eight but can’t kick a ball until half past eight out of consideration for the Clonliffe Harriers people. Rachel Graham laughs about the restriction, just one of those quirks of life in the Women’s National League but a very minor consideration to players like her who remember when first team football meant St Anne’s Park on a summer’s evening.

The league kicks off again this weekend with last year’s double winners welcoming Cork City for their opening game. You will travel some distance to find somebody in the know willing to bet against Shelbourne enjoying another successful season but Graham, good-natured and endlessly respectful to rivals, is politely talking up the field.

City, who Shelbourne beat by three goals both home and away last time, will pose much more of a threat now that Clare Shine has returned home from Scotland, she reckons,

Wexford will be getting players back from injury and even Kilkenny City (no points, two goals scored, 69 conceded) will be better in this, their third season. “It’s getting better every year,” she says, “more competitive. The first year, it was Peamount and Raheny, just a two-horse race really. But it’s got tougher, there are no gimmes now.”

Half an hour later, and a little cautious, Graham acknowledges that not retaining the title would be a major disappointment given the squad Shelbourne have while reaching the last 32 of the Champions League is also a target.

On the personal front, there is a lot to contend with. Getting into new Ireland manager Colin Bell’s squad should, on the face of it, be a priority but, a little hurt perhaps by her inability to nail down her place under Sue Ronan, Graham insists she will take it as it comes.

“If it happens, it happens,” she says with a smile. “He says he will go to the games so you never know, I might get a recall. But if it doesn’t then it wasn’t meant to be.”

Her first game back, the cup final, marked her debut as a right back and Maher says that is where he wants to use her for the coming season.

“I used to like the number six role. Harry Kenny was the first to play me there when I was on a FAS course with him seven years ago, when I was 20. It’s a lot of dog work, winning the ball back, intercepting things, screening a pass into the centre forward. A lot of people don’t appreciate what you’re doing but then others see it and I always liked it.

“I told Shaun, though, that I’d do whatever the team needed. As long as I’m on the pitch.... And after a couple of games there I’m beginning to learn the role, get forward on the odd overlap. To be fair, though, I have Leanne Kiernan in front of me. How am I supposed to overlap her? She’s a bomber.”

She has, in any case, plenty to be getting on with. Weekdays are spent commuting between Carlow, where she is doing a Sports Management and Coaching Course and Dublin where, in addition to training and playing with Shelbourne’s first team, she coaches the club’s under-16s who have a major cup final approaching. Her schedule is, to say the least, hectic with a lot of miles put in but this has been the dream, a life in football, ever since she can remember and she is, she insists, enjoying every moment.

“It was always a big part of my identity, football,” she recalls. “People, neighbours and friends, would come up and the first thing would be to ask how the football was going. I was the girl who played football and it was always in my mind I suppose. That’s what I wanted to do.”

“I was the only girl but they never batted an eyelid. They never treated me any differently. I played with them and then I joined a boys team. I never really thought I was any different, or ‘I’m the only girl’, I never felt out of place and the lads always accepted me. Maybe the first time they’re wondering... but once they see you can play . . .”

After a couple of years with the boys at Trinity Sports she moved on as a teenager to Raheny where the team enjoyed success all the way up and, eventually, at senior level.

A couple of years ago, with the strain of the first team competing at national league level proving a drain on the wider club’s resources, they merged with Shelbourne and, after an initial settling down period, the potential of the new entity started to become apparent last season.

All are amateur with not even expenses paid but Graham insists that they are looked after well.

“There’s no money, I’ve got petrol and tolls every time I drive up for training or a game but you’re all doing it for the love of the game.”

The course, she says, is good too and having had little interest in pursuing a scholarship abroad, she is happy to be close to her family in Donaghmede.

“People used to talk to me about going away but I’m a bit of a home bird. And it’s different for men; they are looking to get away to make a life in the game but for girls there isn’t really the same option, there’s probably no money in it for women.

“That wouldn’t have been the big thing for me, though. It’s just not something that would have interested me anyway. Living abroad....Carlow’s far enough for me. I’m homesick on a Friday as it is.”

She has no regrets about the path she has taken and now Saturdays, game-days, are about to make the weekend worth waiting for again.