Sonia O’Sullivan: Irish athletes not helped by the non-wearing of the green 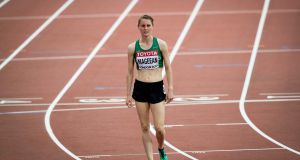 A dejected Ciara Mageean after she finished 13th in her heat at the World Championships in London. Photograph: Morgan Treacy/Inpho 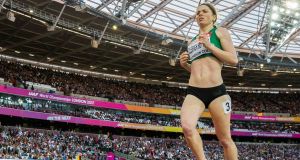 Ireland’s Siofra Cleirigh-Buttner finishes in sixth place in her heat of the Women’s 800m at the World Championships in the London Stadium. Photograph: Morgan Treacy/Inpho

Not many sporting events have come under as much scrutiny as the World Athletics Championships.

For those 10 days in London, it seemed every race and event was being analysed in every minor detail, and everything else that came with it, one of the reasons why athletics has and always will be so attractive to a wide audience.

Even watching from distant Australia via the wall-to-wall coverage on Eurosport, it was hard not to get trapped in the bubble of London. I’m just not sure there are many other sports where athletes’ expectations are analysed so much by the public, especially if these expectations are not met.

If golfers miss the cut, or a player fails to score, is their entire sport held up for scrutiny?

Certainly the Irish team would be best to close the door and move forward. There needs to be positive momentum from the start and we certainly lacked that on this occasion.

But it didn’t feel like a good start when the first picture of Irish athletes arriving at the Olympic stadium had them dressed looking more like the New Zealand team in their all black tracksuits. Few countries are more associated with their national colours, so where was the green of Ireland? The singlet was a very nondescript shade of the green, the shorts black.

It may seem a minor detail but when you consider that for most of the year athletes train and compete in sport specific gear it can be one fine detail that creates a bit of tension in the already highly-strung environment of a World Championship event.

Athletes are allowed to wear their own shoes to compete as this is seen as technical equipment, but when it comes to the racing gear you wear whatever is assigned by your country. This was something I often wanted to have close to perfect. When I was competing at the highest level, and as much as it’s a great feeling to get out and compete for your country, you want to look good and feel good while doing that.

There is always some nit-picking of gear when athletes change from the sponsors’ gear they get used to throughout the season to all of a sudden brand new, straight out of the packet gear.

This issue used to follow me around. And nobody would have even known until it was highlighted when I was forced to change gear as I walked to the Olympic final in Atlanta in 1996. When you think you can get away with what’s more comfortable, what you’re used to, you take the chance.

There are plenty of other examples I can recall. In Barcelona in 1992 we had a nice white singlet but there was no shamrock. So I did a little cutting and sewing from an old Irish running top onto the Olympic singlet.

At the 1993 World Championships in Stuttgart I also did a little cutting and sewing to convert a winter singlet to a more suitable summer crop top.

So Atlanta 1996 was a storm in a teacup that should never have happened.

When winning the 1998 World Cross Country in Marrakesh, I actually wore the gear from 1997. It was a nicer shade of green and the cut was just so much nicer. I kept the same gear for later in the year at the European Championships in Budapest, and at that stage I was maybe getting a bit superstitious and afraid to change. Either way it worked.

It’s one of those things that you wonder when decisions are made to change gear by a federation. Are the athletes ever consulted to ensure suitable equipment?

It was something we spent a lot of time on before the London Olympics, when I was chef de mission, because I felt it was an important detail, one less thing for athletes to stress about.

I know it was a very short notice change for Ireland this year but if you can’t get the right gear then you should be allowed to wear what you have until suitable gear is available.

It just makes no sense to accept something less than perfect when representing your country on the world stage. To my mind there are a few things that need to be constant in an athlete’s season and gear is right up there with sleep and diet. And all the fine details, those one percentages, can give an extra edge to an athlete’s’ performance.

There is no getting away from it. Whether you like green or not that is our colour. There have been many shades of green down through the years, some certainly nicer than others, but at least you stood out as Irish and that alone can give a boost to the athletes and supporters.

As much as Ireland were close to underground in the results delivered at these World Championships, they also slipped through the cracks in the nondescript gear.

Even the volunteers stood out in their bright pink jackets. You can see there is a lot of thought put into the detail of this as it is all part of the branding that attracts the viewers and spectators as they make their way to and from the stadium each day.

I actually found myself cheering the Ivory Coast athletes, as their flag is Ireland backwards and they really used the colours to great effect on their race kit. The Dutch were similar in their bright orange strips and even Botswana in their light blue and snazzy luminous arm warmers stood out long before Isaac Makwaala took his solo run in lane seven.

There is so much more to athletics now, so much expected and we all need to move with the times. As much as athletes train hard and run fast, they also need to recognise as a professional athlete they are a brand and you have to really work hard to stand out.

With over 2000 athletes all vying for attention, it takes something special to be noticed when only eight per cent come home with a medal.

Countries are also a brand and this needs to be recognised and used to boost the athletes, to make them feel good and feel that they owe it to themselves, so that regardless of the outcome they are still important ambassadors and should be encouraged to stand tall and feel proud to be wearing the green.

There were many statistics thrown around over the last week, lists compiled of those that managed to secure a medal or even just about scrape on to the placings table.

Of the 200 or so countries taking part at these World Championships, 37 won at least one medal, 64 were ranked on the top 8 placing table.

Ireland just scraped in on the last day as Rob Heffernan never gave up on a tough day for him. Rob moved up from 31st position at the halfway mark to a well-deserved eighth place as he crossed the finish line at the end of a gruelling 50km walk.

Rob definitely returned the best he could accept on the day, though still not the best he expected of himself. I have followed Rob’s progress throughout the year, fascinated by the level of training and commitment required to deliver results in his chosen event and at 39 years old, years and years of this level of training and commitment wears the body down.

It’s hard to step down when you’re still able to deliver better than any other Irish athlete at the World Championships. But Rob isn’t selfish and he’s already looking for his replacement by investing his energy into the next generation and to do this he may be re-energised in another way to continue to deliver the best result for Ireland. Wearing a little more green, hopefully.

1 Keith Duggan: Bubba Wallace tweet shows just how troubled Donald Trump’s mind is
2 Jack Charlton’s own grievances endeared him to Irish fans
3 Jack Charlton: Tributes paid to ‘sporting icon’ and ‘father figure’
4 Capturing Irish hearts and falling asleep in the Vatican: Jack Charlton in his own words
5 Jack Charlton’s tactics were divisive but he transformed Irish expectations
Real news has value SUBSCRIBE
Here is your handy guide to sport on television this week