Glencullen golf course has been adapted to an activity circuit, a sign of changing times 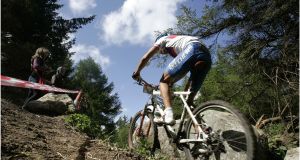 The Widow Maker starts on the edge of Ticknock Forest and cuts straight through the old ninth hole and jumps clear over what was once the short soft green.

The Witches Cauldron comes down along what is left of one of the main fairways and sweeps around with a perfect view out across Dublin Bay and the Sugarloaf.

The Death Grip corners the lake by the old fourth hole and races down to the clubhouse, the last piece of evidence that this place was indeed once the Glencullen golf course – before it became the Glencullen mountain bike park.

The transformation is now complete, and these are just some of the new mountain bike trails – suitably named, trust me – which get their first operational run through this Saturday before officially opening for business as the Glencullen Adventure Park (or “the Gap”, as us locals are already calling it).

This may not be the first golf course to be turned into a mountain bike park and it may not be the last either, and while the gentle gravity of the Dublin Mountains are primed for a development like this, it may also be a sign of the times. Old golfers beware: flying bicycles (and local runners) coming through.

Because despite all the cheap thrills at our fingertips these days, most people still lead pretty dull lives. The soft greens and fairways may still satisfy some people but for the owners of Glencullen golf course the numbers no longer added up. First opened in 1997, they closed the course in early 2015, and it’s now about providing for what some might say is a higher recreational cause.

Not that the popularity of sports can be strictly measured by the numbers alone. There may well be other golf courses around the county lying mostly idle that could just as easily lend themselves to other sporting or indeed more profitable purposes, but the membership fees somehow still make them pay.

In running – and in turn athletics – those numbers don’t always seem to add up either. At one level the sport has never been more popular – the latest evidence of which came just last week when all 20,000 race entries for next October’s SSE Airtricity Dublin Marathon were gone, more than three months ahead of the event, which takes place on the Sunday, October 29th.

Last year was the first time the event was moved from its traditional Bank Holiday Monday to the Sunday, which helped contribute to a then sell-out of 19,500 runners, a 30 per cent increase on 2015. That limit was raised slightly this year but was capped at 20,000 (which now makes Dublin the fifth largest in Europe), and unlike the late emergence of some tickets for U2 at Croke Park, the marathon is a proper sell out.

Back in 2004 he was a semi-competitive club runner, with South London Harriers, before a series of injuries left him somewhat off his regular pace: as a way of encouraging himself and others back into semi-competitive mode he staged a 5km race in London’s Bushy Park, which attracted 13 runners – and the numbers now clearly speak for themselves.

And while Sinton-Hewitt may be full-time, the park-run itself is essentially a voluntary business, all events free to all entrants beyond the odd foot blister or stomach cramp (remember it’s always best to run on an empty stomach). In the UK alone, about 80,000 people compete every Saturday morning – more than twice the number who compete in the London Marathon once every year.

Another part of the seemingly incurable attraction is that all events also start at exactly the same time (9.30am on a Saturday morning) all-year round, and all the finishing times can be compared against each other, and also given an age-graded score – which is measured as a percentage against the current world record in that particular age bracket.

This allows runners compare personal performances against each other, even though they might be a different age and a different sex: the higher the score the better the performance, etc. It’s not meant to be a competitive thing but ask most of those who have done a park-run how they got on and the first thing they will tell you is their time.

At the more strictly competitive level end of athletics, meanwhile, the numbers continue to strike a more contrasting note. Tuesday’s Cork City Sports were a marvel of local organisation and enthusiasm too, yet the absence of Irish athletes in almost all the headline races certainly didn’t add up.

This weekend’s Irish Life Health National Athletics Championships at the Morton Stadium in Santry, while showing some increase in numbers in many distance races, continues to see numbers drop off elsewhere, particularly in field events.

These championships have never had to worry about sell-out crowds and while the primetime live RTÉ slot of 6pm-8pm for Sunday evening’s finals may please the sponsors and competitors, it will do nothing to draw in more spectators. If anything it will have the opposite effect.

For a sport that at one level has never been more popular, that doesn’t quite add up, not when a park-run attracts more runners than spectators at a national athletics championships.