Sonia O’Sullivan: Medal upgrades come too late for me 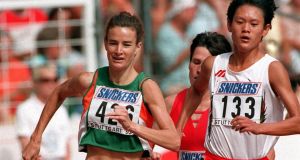 Sonia O’Sullivan on her way to taking silver in the 1500m at the World Championships in Stuttgart in 1993. Photograph: Billy Stickland/Inpho

It feels strange to be making plans to watch the World Athletics Championships in London on a cold, dark evening in Melbourne, far away and yet so close because this is an event that will always bring certain things back home for me.

One of the things I’ve been thinking about this week was the announcement that as part of these World Championships in London, a number of athletes will be upgraded from past championships. Medals from athletes that have proven to have cheated will be redistributed to clean athletes.

That’s five relay teams and 11 athletes whose results from past World Championships have been upgraded because of doping violations by others, each of whom will receive their new medals.

In front of a packed stadium national anthems will be played, flags will be raised, and it struck me how nice that would be – to be acknowledged and awarded publicly.

This takes me back 24 years to my first World Championships in Stuttgart, Germany, in 1993.

After finishing fourth in the 3,000m behind three Chinese runners, I came back in the 1,500m and put three races together, getting faster each time, to win the silver medal, again behind a Chinese athlete.

It was never something that I thought about in training, that I would need to back up three races in four days, and all that goes with three championship races in a row. The daily travel and check-in at the stadium, all the protocol. It is just so much more time-consuming and energy-sapping than a regular one-off race.

It takes speed to be competitive in individual races, and strength to be able to run back-to-back races in such a competitive environment.

It is then that you realise that all the 100-mile weeks start to make sense, building strength and endurance through the winter so you don’t falter at the championships as you make your way through the rounds.

And then there was the talk of what the Chinese athletes in 1993 were doing.

It took some of the gloss off my silver medal when so many people were questioning their strength and power and ease of winning – no emotion, no explanation, just question marks.

Still, I never really dwelled too much on what some people had dubbed “the Chinese takeaway”. I never dwelled on what might have been, or what still may come.

There was a glimmer of hope in February of 2016 with the admission in a signed letter by the Chinese athletes acknowledging that they were part of a state-run programme that helped to enhance their performances.

It certainly created havoc in the statistics and record books, which still read more like fairytales than credible performances all those years ago.

Over a year later there is still no sign that any communication was ever made between the International Association of Athletics Federations (IAAF) and the Chinese athletes, or any follow-up to that mystery letter that was signed by these athletes admitting they had been forced to cheat as part of a state-run system.

It is hard to see if anything will come of it now, 24 years after Stuttgart. The positive thing is that the retesting of samples now – which wasn’t there in 1993 – is at least allowing for the redistribution of medals in cases were athletes have been proven to have been cheating in the more recent past. I can think of some other situations in my career where this has also come too late for me.

As for these World Championships, one of the races I am most looking forward to is the women’s 1,500m, and not just because it includes our own Ciara Mageean.

It is always one of the less predictable events, and this year has all the ingredients to make for a great series of races leading to the final next Monday evening – or Tuesday breakfast time for me.

The heats and semi-final take place over the first two days, then a day’s rest before the final on Monday.

The Olympic champion Faith Kipyegon, world record holder Genzebe Dibaba, world-leader Sifan Hassan, and local hero and favourite Laura Muir are all in the mix for the medals.

The wildcard, if she runs, is Caster Semenya, dominant over 800m, although I would have to question her ability over three rounds of 1,500m.

Mageean will spark Irish interest as she attempts to make her first senior global final having shown great promise early in her career – winning silver medals at World Youth and World Junior Championships.

My own planning for these championships centres on how to catch as many live finals as possible and feed into some the race predictions. So far that’s mostly being done on social media because there hasn’t been much talk of the championships in Australia, or least not around Melbourne.

This creates just a small bubble of interest for the niche audience, and for me that mean setting the alarm clocks for 4am most days so as not to miss the live action.

I’ve planned out the timetable in Melbourne time, wrote it all down in my diary, tried to invite a few friends around for the opening weekend to build some atmosphere. Not too unlike as if I was competing myself.

The only socially-friendly times are the men’s and women’s marathon on Sunday night, and maybe with a little playback from the night before we can bring a little bit of the international athletics buzz from London to the Melbourne suburbs.

And I need to remember to leave the phone switched off with all the alerts and updates from the instant apps and social media frenzy coming out of London each day.

The plan is for an early-morning espresso and then just myself and Snowy on the couch, with the hot water bottle and blanket, watching the action unfold

That’s the other thing that makes it all seem so far away, the dark mornings and cold temperatures in Melbourne, running around in long tights, long sleeves, gloves and hats. My summer of athletics already feels like it’s long gone so soon after I enjoyed sitting on a grass trackside in Ireland just a few weeks ago.

Maybe I’m just wishing myself away from the cold Melbourne winter, and perhaps in two years’ time I’ll be able to trade 4C for 40C when the 2019 championships kick off in Qatar.

Yet I’m not so sure they will have the same appeal or energy that will envelope the London Olympic Stadium over the next 10 days.

Locally it may be low-key, but even while tuned into the social media, athletics still has the appeal to get me out of bed early and to stay up late.