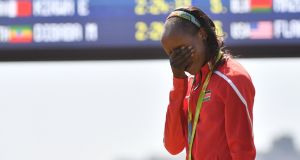 Kenya’s Jemima Jelagat Sumgong reacting during the podium ceremony of the Women’s Marathon during the Rio Olympicas at Sambodromo in Rio de Janeiro. She has now tested positive for banned substance EPO. Photograph: Fabrice Coffrini/AFP/Getty

Why do athletes cheat?

I’ve often asked myself that question over the years and can’t get it out of my head this week, trying to make sense of the latest positive drug test to come out of Kenya. It’s as if they don’t even care anymore.

For me, the Kenyan athletes always had an aura about them, a little bit of mystique. The stories of how they grew up in the Great Rift Valley, running to and from school, eating simple food and all the while enjoying it.

When I first moved to London, in 1992, many of the top Kenyans trained with us around Teddington: Moses Kiptanui, William Tanui, David Kibet, each one with a great story of where they came from. I saw how hard they trained.

Down through the years, many more Kenyan athletes followed on from those that blazed the trail before them. In the beginning it was all about the racing and the winning, maybe earning a little bonus money in Europe and America to send back home and help provide for their families.

There weren’t many women among them; the first to really make a name being Sally Barsosio, still only 15 years old. Sally was a gangly schoolgirl, with a very ungainly style, arms all over the place and appearing to lack any spatial awareness. But she could definitely run, usually as fast as she could from start to finish, with no fear and winning being the only goal.

In December of 1994 I went to Kenya for a short while and met Sally’s mother. She lived in a mud hut with two rooms; one for living, one for sleeping. We were invited in for sweet milky tea and toast, while outside the doorway cows ambled past, a new addition bought by Sally after her recent winnings in Europe.

It all seemed so basic, so simple, so charitable, but now feels like a lifetime ago, because things have certainly changed.

For years I maybe gave Kenyan athletes the benefit of the doubt when it came to doping and cheating, but not anymore. It reached another low point last Friday when it was announced that Jemima Sumgong, the Olympic marathon champion, tested positive for EPO.

Sumgong is just the latest in a line of Kenyan athletes getting caught, mostly in the marathon, because that’s where the financial rewards are greatest. She was tested in Kenya, out-of-competition, by the extra level of doping control established by the World Marathon Majors events, to help protect their record and substantial prize money. Otherwise she might easily have escaped.

They pay a high price if caught, not just destroying everything they’ve achieved but further tarnishing all Kenyan athletes

Sumgong’s response went to script: denying she had done anything wrong, putting all her success down to hard training, nothing else. There is no denying she would have trained hard, but the ability to recover and train even harder is where the doping comes in.

Still, it makes you wonder why the most talented athletes on the planet, born and raised at altitude and already with an advantage over most other athletes, can be drawn to the dark side, and somehow justify to themselves that it’s okay to cheat.

They pay a high price if caught, not just destroying everything they’ve achieved but further tarnishing all Kenyan athletes, particularly those in the same training group, and putting less and less credibility on the times they run.

More worrying is the impact it’s having on interest in the sport, especially the marathon. I’m more in tune now with junior athletics and maybe keeping track of Villanova athletes throughout the year, and even though I still scan the results of the big city marathons, they rarely count for much.

The Paris marathon at the weekend, for example, was won by a Kenyan husband-wife duo of Paul Lonyangata and Purity Rionoripo, in fast times, but the connection is lost.

Of course not every athlete is cheating, and there are plenty of great stories of athletes who have happily made running their life

Just like the World Cross Country a few weeks ago in Uganda, which used to be one of the most important races on the calendar. The Kenyan women took the team title with a perfect score, taking the top six places, but again it failed to register, that lack of credibility possibly part of the problem.

Of course not every athlete is cheating, and there are plenty of great stories of athletes who have happily made running their life, happy with their own success, without the obsession of fast times or bonus payments which tempt some of them to steal an advantage.

I was on the Tower Bridge last year, watching the London marathon go by, looking out for Britain’s Charlotte Purdue, who had been training in Australia with the Melbourne Track Club. I’d actually taken her to see some kangaroos, a few weeks before, and now here she was chasing the Rio Olympic qualifying time.

As we stood on the bridge, trying to get a glimpse of the runners going past, the leaders in the women’s race came flying past, including Jemima Sumgong. There was a big gap on the chasing group, including Purdue, but in many ways that was the more interesting race. In pure athletic terms, the stakes were greater.

Then it was a mad dash to the finish, Sumgong crossing the line victorious, with great ease. There was a different sort of mystique about her then, in that no one knew much about her, and never imagined she’d go on to win the Olympic marathon.

Just over seven months later, reading about her positive test wasn’t so much shocking as saddening, that this was allowed to happen. The Olympic marathon carries great prestige and there was a time I could name all the former champions. Only now they seem to come and go.

Then you read about the very limited drug testing in golf, one of the richest sports in the world, when even a bad day can be very decent payday

It’s happened and happening in other sports too. I caught some of the US Masters from Augusta over the weekend, the unpredictability of the result keeping me intrigued until the end, and there’s no denying the great connection and passion between the golfers and the crowd. Then you read about the very limited drug testing in golf, one of the richest sports in the world, when even a bad day can be very decent payday.

Marathon runners don’t have that luxury, so maybe golfers don’t have that same incentive to cheat, but while there is such secrecy and lack of transparency it’s very difficult to get to the bottom of it, knowing the risks of pushing the body to extremes and the need or ability to recover.

The consolation for athletics is that they are at least catching some of the cheats, and despite the negative reaction surrounding a positive test such as that on Sumgong, it is another victory for the athletes who compete clean, another step closer perhaps to the medal podium.

At this stage Kenya’s record is so damaging the IAAF might want to consider banning the country, like they did Russia, although I’m not sure that’s the solution either. Banning Russia has erased one country out of the problem, but we don’t know how many more are out there, still ahead of the testers, just being a lot more quiet about it.

The problem runs deeper, in that in some countries it seems there are conflicting motivations at play, coaches and managers and athletes and maybe some rogue doctors too, not all on the same page and with little or nothing to do with the true values of sport.

As an athlete you owe it to yourself and those around you to compete clean, that should be your primary motivation going to the start line, but it appears to me that many Kenyan athletes have lost that race.

1 Real Madrid crash out to relentless Manchester City performance
2 Lyon make Juventus wait another year despite Ronaldo double
3 Andy Farrell admits Ireland net may need to be spread wide in the autumn
4 Radically shortened intercounty season to be discussed
5 The game they loved so well: How cricket united Hume, McGuinness and McCann
Real news has value SUBSCRIBE
Here is your handy guide to sport on television this week