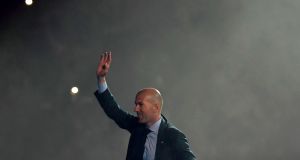 Zinedine Zidane has walked away from Real Madrid, just five days after winning a third consecutive Champions League. The Frenchman announced his decision at the club’s Valdebebas training ground on Thursday afternoon, insisting that he and the club needed a “change” and admitting that he was not convinced that they would continue winning if he remained in charge. The club president Florentino Pérez described it as a “sad day” and said that the decision was “totally unexpected.” Zidane would not say exactly when he made the decision to depart.

Pérez claimed that Zidane ha communicated his decision on Wednesday, and a press conference was hurriedly called on Thursday morning, less than two hours after the coach appeared. At the same time, the players were informed of the decision by text message from club officials. Zidane said that he had spoken to the captain Sergio Ramos and that he would speak to the other club captains, Cristiano Ronaldo and Marcelo, in due course. He said that he had no plans to manage another club but he did say that he is not tired of coaching. Madrid did not say anything about his successor, but Mauricio Pochettino is among those they had long identified as potential candidates.

Zidane had been due to meet the club on Thursday to discuss plans for the coming season – plans that would include the futures of Gareth Bale and Cristiano Ronaldo, both of whom had suggested that they would leave immediately after the Champions League final. Instead, it is the Frenchman who walks away. He was joined in the press conference by the president, who did not answer questions. “I would have liked to convince him [to stay]but I know how he is,” Pérez said at the start.

“I have taken the decision not continue as coach of Real Madrid next year,” Zidane said. “I spoke to [the president]to explain what I thought. I think it is the moment, for me and for the squad, for the squad. I know it is a bit of a strange moment, but I think it is the right moment. This is a team that should keep on winning and it needs a change for that. After three years, it needs another discourse, another working methodology, and that’s why I took this decision.”

“There are complicated moments in the season when you ask: ‘am I still the right person?’,” Zidane said. “I don’t forget the hard moments too, there are lovely moments and we ended with a spectacular moment, but there are hard moments that make you reflect.” He identified Madrid’s elimination in the Copa del Rey as one of the key moments.

“I think it’s the moment to go,” he said. “I also think the players need a change. They’re the ones who fight on the pitch. It’s not easy for them; it’s a demanding club, a club with a huge history and the players are always squeezed, we always want more and more and there is a moment when you think: ‘well, what more can I ask from my players?’ I want to win and if I don’t see clearly that we’re going to keep on winning, then it is best to change, and not do anything stupid.”

Zidane leaves having won nine titles, including three consecutive European Cups, although he said that the title that gave him the greatest satisfaction was last season’s league. Asked if he might have stayed on had Madrid not won the Champions League final against Liverpool, he replied: “I don’t know. Could be, could be.” – Guardian service