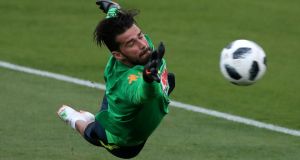 Jürgen Klopp will make a renewed attempt to prise the goalkeeper Alisson from Roma this summer as he looks to upgrade Liverpool’s squad following defeat in the Champions League final.

While Liverpool players refused to blame the “infinitely sorry” Loris Karius for defeat against Real Madrid in Kiev, with Dejan Lovren appealing for criticism of the 24-year-old to be restrained, their manager has already made plans to sign a new first-choice goalkeeper for next season.

Alisson, Liverpool’s opponent in the Champions League semi-final, remains Klopp’s favoured choice with the Brazilian scouted extensively throughout the season.

Roma, however, have been resistant to dialogue with Liverpool this year and it will require a considerable offer to test the Italian club’s resolve. Alisson’s employers have also been scarred by internal criticism for selling Mohamed Salah to Liverpool last summer for £36.9m. There were fears that the Egypt international could miss the World Cup with the shoulder injury that changed the complexion of the final although he tweeted on Sunday night that he is “confident” he will be available.

Jan Oblak of Atlético Madrid has also been linked with Anfield but Klopp was prepared to persist with Karius after his £4.7m signing from Mainz responded well to being confirmed Liverpool’s No 1 ahead of Simon Mignolet. But that was the position prior to the aberrations that contributed to the 3-1 defeat in Ukraine. The Liverpool manager insisted he and his club “will be with” Karius as he comes to terms with the errors that enabled Real Madrid to record a third consecutive Champions League triumph. He may have to broaden his search for a new first choice keeper should Roma maintain their stance on Alisson.

Klopp’s plans for midfield improvement are in place with Naby Keïta secured for £52.75m from Red Bull Leipzig and Lyon captain Nabil Fekir targeted for a transfer costing a minimum of £60m. Klopp will be armed with a sizeable transfer budget having made around £70m for reaching the Champions League final and banked £142m from the January sale of Philippe Coutinho to Barcelona.

Karius was inconsolable after the final on Saturday and apologised to Liverpool fans and team-mates for his two mistakes. On Sunday he extended his apology on social media. “I know I messed it up with the two mistakes and let you all down,” the goalkeeper wrote. “Haven’t really slept until now. The scenes are still running through my head again and again. I’m infinitely sorry to my team-mates, for you fans, and for all the staff. I’d just like to turn back the time but that’s not possible.”

Liverpool players were criticised for not consoling the young German keeper immediately after the final whistle but there was only support for Karius afterwards.

Lovren said: “When we win, we win together. When we lose, we lose together. Don’t blame him. It’s easy to blame someone but we are in the same ship together and everyone gave him the best words that they can. He will come back strong. You cannot find the words. He had a difficult start last season, so I believe in him. Don’t make massive stories about that. Of course it’s big because it’s a final, but everyone makes mistakes.”

Andy Robertson had a similar message for the Liverpool keeper. “We win as a team, we lose as a team and we fell short,” the Scottish full-back said. “Of course he made mistakes but we are not blaming him. He has been incredible since he got the number one jersey. He is young and he will learn from it. He will be a top, top keeper. We have fallen short and there are no words that we can say to Loz that will make it better for him.”

Robertson was one of many Liverpool players in Kiev who insisted that Salah’s cruel exit after 30 minutes, and not Karius’s mistakes, was the true turning point of the final. He also suggested, diplomatically as possible, that there was an element of intent behind Sergio Ramos’s prolonged hold on Liverpool’s leading goalscorer.

“I think it is just how Mo has landed but Ramos is quite clever, isn’t he?” said Robertson, rhetorically. “It is just the way he has landed on it. It disrupted our rhythm a wee bit. Everyone looks because it is Mo Salah. He has done unbelievable this season and for it to end that way for him was devastating.”

Lovren concurred: “We are devastated, it’s heartbreaking. Mo is one of the most important players for us and it’s not the same when you don’t have him on the pitch. The mindset is totally different when you have him on the pitch. It was difficult to accept that we, again, had such an unlucky moment with so many injuries. I cannot believe we had so many injuries this season.”

The Liverpool captain, Jordan Henderson, described his second defeat in a European final for the club as “the worst feeling I have had in football”. But he was adamant the consistent progress Liverpool have made under Klopp would not be disrupted by the latest setback and silverware under the German coach will materialise.

“I believe we will be in another Champions League final,” Henderson said. “I believe we will be challenging in all competitions domestically. The Premier League is important to us and we are qualified for the Champions League next year so we need to do it sooner rather than later. I believe in this team, I believe in this manager and I believe we are going in the right direction. It is so difficult to stand here now and say that but that is the truth. It is how I feel. We have to make it happen.”

Aryn McClure’s Irish adventure could come to a winning end 06:30
Aidan Rochford ‘loving’ being back on Wexford panel 06:00
Post-World Cup years throw up more debut opportunities for debutants 06:00
Women’s football is back and better than ever 06:00
Andy Farrell sidesteps Saracens issue at Six Nations launch 06:00