‘They’ve same profile as the ones we’re going to face at World Cup, it’s going to be tough’ 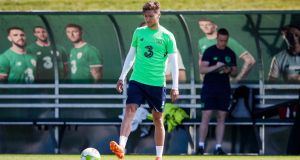 Jeff Hendrick has not travelled with the Ireland squad to Paris. Photograph: Ryan Byrne/Inpho

Republic of Ireland skipper Seamus Coleman is one of only four survivors from the starting XI who faced France in Euro 2016 in contention for Monday’s friendly battle with Didier Deschamps’ team.

Midfielder Jeff Hendrick would’ve been a fifth, however he has been left behind in Dublin because of a lower back injury.

The squad has an inexperienced look about it with Colin Doyle boasting the only two caps earned by the three goalkeepers and Airtricity League players Shane Supple and Graham Burke among a series of potential debutants.

Coleman said: “It definitely feels like there’s been a bit of a change with the new players coming in.

“It’s up to them to step up and show they deserve to be at this level, and I’m sure they will. There’s definitely a bit of a change, but the objective stays the same: we want to win every game possible and qualify.”

Ireland boss Martin O’Neill will use the match to run the rule over some of his newcomers against opposition he believes could have a major impact in Russia, unlike Denmark counterpart and former team-mate Age Hareide, who has described the current French team as “nothing special”.

O’Neill said: “Did he say that? Well, I know the Danish coach — I used to play with him. He’s a very nice man — he wasn’t such a great player himself.

“It’s highly dangerous to talk about that. Personally, I think they’re very strong. They will be disappointed to lose the final of European Championships, but overall they have as good a chance as anybody of winning the World Cup.”

Meanwhile Deschamps has warned Russia-bound France not to under-estimate the Republic of Ireland as they build towards their World Cup adventure.

The sides meet at the Stade de France on Monday evening, with Deschamps and his players three friendlies away from the finals and Ireland knowing their season will draw to a close with next Saturday’s clash with the USA.

However, the France boss knows even a Republic team without most of the men who gave his men a fright in the last 16 of Euro 2016 will not run out simply to make up the numbers.

Asked if he was hoping for a similar result to the 4-0 drubbing they handed out to Norway before the 2014 finals, the manager said: “I don’t want the Irish journalists to think that we chose Ireland because we thought we were going to have fun and we were going to win.

“We played Ireland at the Euros and it was very hard. We chose this team because they have the same profile as the ones we are going to face at the World Cup, and it’s going to be a tough game, I can tell you that.”

If France do turn on the style, Ireland may well find themselves having to deal with teenage starlet Kylian Mbappe, a man on whom Deschamps is refusing to place any limits.

Asked if Mbappe could be his number nine, he replied: “Why number nine? He’s a forward, he can move, he has the freedom to go and decide when he’s in a central position and vice-versa.

“He’s just a forward. He can dribble, he has great speed, so he can do everything. Why would you have him stay in the axis position?”

Meanwhile, Deschamps delivered a withering response to Paris St Germain midfielder Adrien Rabiot after he issued an open letter revealing his reasons for asking to be taken off the stand-by list.

He said: “I have talked enough about Adrien Rabiot. Anyone can have his own idea about this situation. I just invite you to look at how he played for the French team last season. That’s all I’m going to say about it.”