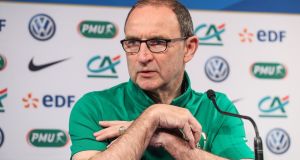 Republic of Ireland manager Martin O’Neill: “Stephen Ward has been the regular left-back for us for the four years that I’ve been involved and it’s up to someone now to go and take that position.” Photograph: Ryan Byrne/Inpho

Take a quick glance at the squad lists now and it is difficult to imagine really how Ireland ever ran their hosts so close in that infamous World Cup play-off match almost a decade ago or gave them an early fright in the knockout stages of Euro 2016 in Lyon. The starkly contrasting circumstances in which the two teams meet have exacerbated things considerably but the gulf in quality is crystal clear.

Two years ago it was all the local reporters could bring themselves to ask about but even now the talk might have been about Ireland returning to the Stade de France in search of revenge. It was not mentioned once at the pre-match press conference, though, and for Martin O’Neill this one is all about research as far as he is concerned.

“We have a number of players that we know the strengths of but there are a number that we are less familiar with,” he says. “This would be as big a game as some of them would have played: France, preparing for a World Cup and with some world-class players in the team. So it’s a test and one that I’m hoping will help me to learn more about them by the time it’s over.

“If I was playing in the game I wouldn’t be considering winding down,” he continued when asked about the fact that his players are edging towards a summer break while their opponents are battling for places at a World Cup finals. “If I had one cap or two caps or three caps, I’d view it as a huge honour to be involved but also potentially an important landmark in my development as an international player.”

Ideally, the manager would be able to exert a little more control over the process but with Jeff Hendrick the latest player to pull out of the squad through injury – a lower back problem – he is short of experience in the heart of his midfield and obliged to experiment in other areas where the French will surely feel they can exploit Ireland’s lack of experience.

“Stephen Ward has been the regular left-back for us for the four years that I’ve been involved and it’s up to someone now to go and take that position,” says O’Neill of just one of the positions in which he is anxious to develop his options, “or at least make it difficult for Stephen Ward to come back in. So it’s an opportunity for someone who is selected in there”.

The manager maintains that he has not yet settled on his starting 11 but Harry Arter, he suggested, will not start this game due to the lingering issue of the Achilles injury he suffered a month or so back; he may feature at some point but the hope is to have him more fully prepared for the match against the USA next weekend.

He left open the possibility of starting with three at the back again but hinted that this might be an occasion for a slightly more conservative approach. “We used the wingbacks in Turkey so as to provide more support to the two strikers and we managed that to an extent.”

With France having rather more potential to open Ireland up both out wide and through the middle, the sense is that Ireland will revert to a single out-and-out striker and devote more resources to the effort to retain control of things around their own area.

The French say they see Ireland as good preparation for their group games in Russia, most obviously the first against Australia who, Didier Deschamps remarked, have a “similarly direct” style.

He seems set to rest some of the side’s biggest stars with Adil Rami, Blaise Matuidi and Olivier Giroud the three most likely survivors from the side that started in Lyon although that is only one fewer than Ireland will have.

Kylian Mbappe should feature, though; quite a prospect prospect for Derrick Williams, Greg Cunningham or Matt Doherty in the event that they are told to go out there and stake their claim to Ward’s position.

Should such an inexperienced Ireland side manage to rise to the challenge and frustrate the French, though, it will fuel the doubts that a significant minority have been voicing about their team’s ability to deliver on the much bigger stage.

That, for those, still interested, would be a measure of revenge all right. And served cold enough to chill the summer air, not just in this part of northern Paris but all across the country.

1 Gordon D’Arcy: If Farrell can tap into our self-worth, we’re all on a winner
2 Winds of change as Ireland name a refreshed team, picked on form
3 Who is Caelan Doris? Meet Ireland’s newest rugby star
4 Nike Vaporflys won’t be banned but regulations will tighten
5 Big paycheques lure the world’s best to Saudi Arabia
Real news has value SUBSCRIBE
Crossword Get access to over 6,000 interactive crosswords