‘Tournament’s going to be tough for Panama . . . their achievement is in getting there’ 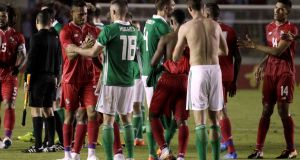 Michael O’Neill’s Northern Ireland side were invited to Panama’s send-off soiree on Tuesday night and though they did not totally spoil the party, they made sure there was no victory for the Panamanians to celebrate prior to their first ever World Cup.

Panama have now drawn with two of the home nations — Wales and Northern Ireland - since November ahead of their June 24th date with Gareth Southgate’s England in their second group game in Russia.

O’Neill knows all about how a smaller country can upset the odds at a major tournament, having led Northern Ireland to the last 16 at Euro 2016, yet following his team’s 0-0 draw he expects England and Belgium to take care of business against Panama.

“There’s always a chance in tournament football (but) I’ll be honest, I would be surprised if England and Belgium don’t beat them,” he said.

“They’ve had a few difficult games in Europe so they’ve tried to change how they play when they play European teams.

“We’ll see how it goes but it’s going to be a tough ask for them to do anything in terms of coming through the first phase of the tournament.

“They have a great pride playing for their country and I think when you have that you’re capable of producing results. (But) I think England will be too strong, to be honest.

“The tournament’s going to be tough for Panama, there’s no doubt, they’re in a tough group but their achievement is in getting there.

“They’ve everything to gain from being there — they should be very proud that they’ve managed to get there and good luck to them.”

On an extremely humid night in Panama City, the hosts came closest to winning the game when Edgar Joel Barcenas hit the crossbar with a first-half header.

It was Northern Ireland’s first game of a two-match tour and O’Neill was able to hand international debuts to three players as well as experimenting with captain Jonny Evans in central midfield.

“The conditions we were playing in were incredible,” O’Neill noted.

“For the players to have to come at this stage of their season, with the level of preparation we’ve had, you can’t ask for anymore — their heart, their desire.

“Years ago Northern Ireland used to come to places like this, lose the game and it didn’t really matter. It matters to the players now, they don’t want to be beaten.”

Panama have arranged a host of friendlies against European opposition since learning who they would meet at the World Cup so there was a purpose to playing Northern Ireland ahead of facing England.

“Northern Ireland have most of their players playing in England,” midfielder Anibal Godoy explained.

“They have maybe the same feeling. They played the long ball with tall guys, they are always very dangerous from corners and free-kicks.

“This is the football for Panama to try to work on for the World Cup.”

1 Golf clubs waiting to hear if they can stay open under Level 5
2 Johnny Sexton aware of how Ireland can offer fans an escape
3 Gerry Thornley: After 32 weeks the Six Nations is back up for grabs
4 Extremes of sweet and sour for Solskjaer as Man United show signs of revival
5 Donegal preparing for marathon solo journeys to Tralee
Real news has value SUBSCRIBE
Crossword Get access to over 6,000 interactive crosswords