US expect the world will eventually catch up with heading ban 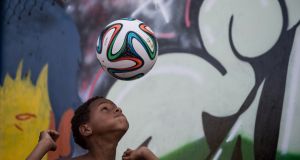 The US has already taken proactive action with a heading ban in place since 2015. Photograph: Getty Images

A top football executive believes the rest of the world will eventually catch up with the United States’ pioneering ban on heading in youth football.

The Professional Footballers’ Association has advocated the move, which would apply to all under-10s, and in January European football’s governing body Uefa said it would consider implementation if its own study provided sufficient evidence.

A major study into the long-term effects of heading and potential links to dementia and brain damage commissioned by the English Football Association and English PFA began two months ago but initial findings are not expected for at least three years.

However, the US has already taken proactive action with a ban in place since 2015.

Kevin Payne, the chief executive of US Club Soccer, national association member of the United States Soccer Federation principally involved in youth football, was involved in the discussions which led to restrictions being brought in.

“While there is not a lot of direct evidence or research which draws a straight-line correlation between heading a ball at young ages and potential issues later in life we think it is a logical assumption as younger children’s technique will not be as good and their brains are not as fully developed,” he said.

“Until such time as that research has been completed and there are conclusions to be drawn we thought it was much safer to err on the side of caution.

“When you are talking about someone’s brain it is a big deal and we need to be almost overly-protective in this area.

“Part of the issue is that no one really knows what are the consequences of heading a ball at this young age.

“Until we do know the answer the only responsible course of action is to do everything possible to minimise the chance of it creating problems.

“There were some individuals who were not happy about it and I am sure there are still, the old guard who think it is silly not to allow heading.

“But we think we are ahead of the curve on this. We think it is very possible that other countries will end up having a little bit of the same thing.”

The regulations have a huge support structure behind them which helps coaches and parents diagnose and monitor injuries with any head trauma flagged up with a warning to seek medical attention.

Dev Mishra, an orthopaedic surgeon at Stanford University, founded Sideline Sports Doc which offers an online course to help injury recognition which has amassed 50,000 coaches and staff members in just over 18 months.

“If we could find a way for these coaches to have some of this basic recognition maybe we could reduce the severity of injuries, especially concussion,” said Mishra.

“How do you figure out this kid has had a concussion and how do you remove them from play so they don’t have another?

“It is a very simple four-step algorithm which attempts to mimic for a coach what we as trained physicians do on the field of play.”

Online tool Player’s Health tracks athletes’ injuries and has 150 organisations from universities and high schools to clubs signed up for a wide range of sports.

“When your athlete is displaying more than one head injury in six months there is going to be a notification that the parent/guardian should be mindful and we can inform them of specialist facilities near them,” said Tyrre Burks, founder and chief executive.

“The whole system is around alerting everyone. The parent is notified and their kid is not allowed to come back and play until they have that medical clearance uploaded into the system.”

1 Wexford best the weather and Kilkenny on a mad day to be hurling
2 On healing and wild hurling: The re-education of Diarmuid Lyng
3 ‘Your father works for my father’: Schools rugby turning toxic in the stands
4 Few, if any, have given as much to Munster as Garrett Fitzgerald
5 Winning Triple Crowns: ‘Seeing Jack Kyle was a spiritual experience’
Real news has value SUBSCRIBE
Crossword Get access to over 6,000 interactive crosswords