Tame Manchester United back to winning ways in FA Cup 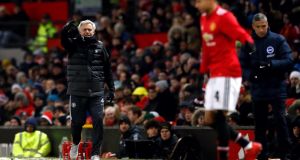 José Mourinho was first out before kick-off as promised during Friday’s extraordinary extended monologue in which Manchester United’s manager promised to face his responsibilities. Really required, though, was safe passage to the FA Cup semi-final, and this was duly secured.

Yet Mourinho’s team were tame again, this win due to Romelu Lukaku and Nemanja Matic strikes, the only two players named as consistently excellent during that 12-minute soliloquy in which he defended his record.

Mourinho’s standout selection choice was the exclusion of Alexis Sánchez. Given the importance of this competition to United, this had to be read as a dropping of the Chilean for the first time since he signed in January.

Paul Pogba also failed to regain his place after being a substitute in Tuesday’s dire Champions League exit at the hands of Sevilla, as Mourinho made five changes in all. Chris Hughton also replaced five of the XI that lost against Everton last time out, the £14m record signing Jürgen Locadia given a second start with the top scorer, Glenn Murray, stood down to the bench.

After the sides walked out in swirling snow United eased into the contest. The visitors first shot in anger came from Ezequiel Schelotto, though the defender’s effort gave Sergio Romero no trouble.

Romero had retained his place as Mourinho’s cup goalkeeper as did Luke Shaw, the left-back who had started in previous rounds. It was down the latter’s flank that Schelotto looked to make inroads, and in one move Pascal Gross released the No21, only for him to be called offside.

Moments later there was panic in United’s fragile-looking rearguard when Solly March had time and space to drill the ball in from the same area and Eric Bailly scrambled the ball out for a corner.

Nearly half an hour had passed before United finally threatened for the first time. The ball was slickly exchanged between Anthony Martial and Juan Mata, and when Mata took aim United won a corner. Mata took this, too, and after panic in front of Brighton’s goal Chris Smalling hit Tim Krul’s left post.

Until Lukaku struck seven minutes before the break, this proved a rare United foray. Before the his finish, it was Brighton who took the initiative as a Gross cross from the left landed on Lewis Dunk’s head and Romero dived to punch away.

Now, though, came Lukaku’s opener. Shaw danced down the left and pulled the ball back to Nemanja Matic. The midfielder hit a sweet ball in and up rose the Belgian for a 30th of the campaign in all competitions.

This brought relief for Mourinho and his men, and United did brighten for the rest of the half, though this was a relative improvement only. The truth was that when the break arrived it had not been a 45 minutes of fluid, convincing play to suggest that the 2-1 loss to Sevilla was a blip.

Instead, when the sides wandered off the sense was of a tie still very much in the balance and a question over what kind of second half performance United would return.

Having suffered from Mourinho’s tongue, Shaw was replaced by Ashley Young after the interval. This may have been due to March and Schelotto’s targeting of United’s left, and if Mourinho computed he could not trust Shaw, then here was the latest setback in his career at the club.

After an opening that had Brighton trapped in and around their area, United’s flakiness was evident again. The ball was relayed to Gross and he had a yard of space to aim at Romero’s goal, the ball just missing to the keeper’s right. Gross then floated the ball on to Leonardo Ulloa’s chest and when it came to Beram Kayal he pulled the trigger to warn United that Brighton believed they could engineer an equaliser.

They came agonisingly close via a moment of Jürgen Locadia magic as the Dutchman fizzed a 20-yard shot at Romero’s top-right corner, the Argentine flying high to save.

United’s best hope of any attack at speed was on the counter. When Matic strode away from his area and found Jesse Lingard, suddenly Brighton were scattered. Martial received next, but when he tried to find Lingard once more the pass was awry.

Yet, again, there was a lull in any quality from Mourinho’s team. Mata tried a ball over the top aimed at Martial but it was too long in what otherwise was a passage of Brighton possession. Hughton’s side seemed to be finishing better. First Matic blocked an attempt, then Smalling did the same to a Locadia shot.

This wakened United as Lukaku and, later, Mata had crosses stopped. When the latter was replaced by Marcus Rashford he was unlucky. Yet by the close Matic had headed in Young’s free-kick and United had done what was needed.