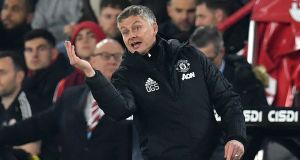 Ole Gunnar Solskjaer was 46 when the game started and roughly 61 by the time it was over. Photograph: Paul Ellis/AFP via Getty Images

Gary Neville was a late contender for our prestigious “Leading Performer in a Commentary Box over the Weekend” award, but, despite his Herculean effort to retain the will to live during the first 72 minutes of Manchester United’s visit to Sheffield (“oh myyyyyyy gaaaaaawd . . .”), he was pipped to the gong by TG4’s Brian Tyers.

Many of us would have decided when we were around nine and three quarters that we were going to become sports commentators, partly because it seemed like a highly exciting job, but mainly because it seemed very easy. So we would have turned the sound down on our tellies and sat there with a hairbrush in our hands while doing our very best Motty Motson.

Never once, though, did Motty have to contend with seven O’Sullivans in the one side. Brian did, during Saturday’s All-Ireland senior club final, the Mourneabbey team containing that many owners of said surname.

Mind you, Jerome Quinn came close to matching Brian’s fastidiousness when he popped up on live coverage of the junior club final on Facebook.

“There are four Maughan sisters in the MacHale team,” he told us, “Rebecca, Katrina, Shauna and Lisa, and there are two Murray sisters, Grace and Emily, and the captain Marie Larkin has her sister Niamh in goal. And Ailish and Madeline Keane are sisters too.” And then the Maughan sisters’ cousin Niamh Maughan came on as a sub and, somehow, Jerome rose to the challenge.

“Rebecca Maughan to her sister Shauna Maughan . . . well, she had her choice of sisters.”

Both games were humdingers, as it proved, Laura Fitzgerald leaving Kilkerrin/Clonberne hearts in smithereens when she scored the winning point for Mourneabbey 20 seconds from time. “That’s the stuff you dream of,” she beamed when she breathlessly chatted with Gráinne McElwain post-match, her club, who were beaten in the 2014, 2015 and 2017 club finals, now having forgotten how to lose, this their two-in-a-row.

In her cup-collecting speech, Mourneabbey captain Bríd O’Sullivan thanked the team’s strength and conditioning coach and sports psychologist, and you couldn’t but think how far things have come.

And Donoughmore made it a double for Cork come Sunday in Ballinasloe, getting the better in extra time of MacHale Rovers – or Crossmolina/Lahardane/Ardagh MacHale Rovers, to give them their full and very lengthy name, three parishes having merged to form the team.

The performance of player of the match Rena Buckley, who helped herself to just the seven points, suggested she might just have a future in the game. But then, she has a decent enough past in it too, this being the 21st national title she’s collected during her career, a tally that includes just the 18 All-Ireland medals for Cork between football and camogie.

Seventy-two minutes into Manchester United’s trip to Sheffield, Pochettino’d have been stroking his phone, anticipating a call

His commentary box sidekick Frank Browne: “Rena could almost be her mother!”

Jerome: “Stop! You can’t be saying that!”

You’d have been chuffed for the certified legend that is Buckley. Well, until you saw that very small girl in the crowd swathed in MacHale Rovers’ colours bawling her eyes out, her Ma trying to console her.

Bless her, she had just learnt that sport has the habit of breaking hearts. Ask Mauricio Pochettino. Seventy-two minutes into Manchester United’s trip to Sheffield he’d have been stroking his phone, anticipating a call. And you could tell how serious the situation was by the depth of Gary Neville’s voice, it falling to baritone level when Lys Mousset made it 2-0 for the home side.

By the time Mason Greenwood equalised – as writer Duncan Alexander pointed out, he is “the first player younger than iTunes to score a Premier League goal” – it had raised a notch, and when Marcus Rashford made it 3-2 we’re talking tenor.

Ole Gunnar Solskjaer was 46 when the game started and roughly 61 by the time it was over, much of that rapid ageing down to him recalling the moment he decided it was a good idea to insert Phil Jones into his defence.

On Saturday, Roy Keane swooned over Kevin de Bruyne’s performance for Manchester City against Chelsea. “He always looks like he’s in control, I spent half my career fighting with the ball.” Phil has spent much of his seeing it as something to trip over.

He needs to talk to Rena: the ball need not be your enemy; it can be our best friend.