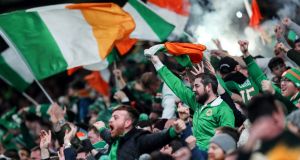 Republic of Ireland fans celebrate Matt Doherty’s goal against Denmark at the Aviva Stadium. Would an All-island league help to draw the two footballing authorities in Ireland closer together in a time of potential political change. Photograph: Ryan Byrne/Inpho

Belfast, 6.30pm, last Saturday: there were Dutch orangemen on the march up Donegall Avenue as GAWA, the green and white army, descended west down Tates Avenue; nearby optimistic merchandise men held green and orange Northern Ireland-Netherlands half-n-half scarves and on Olympia Drive a woman handed over a leaflet. ‘Have you thought about your soul?’ it asked.

To be honest, not for a day or so. The more pressing question was how Josh Magennis was going to disrupt Virgil van Dijk’s evening at Windsor Park.

While one of Michael O’Neill’s achievements has been to bring belief to his Irish squad and support, it seems unlikely it was done through Biblical verse. However he does it, though, it works.

An hour and 20 minutes later, Northern Ireland were charging at the Dutch with conviction, skill and discipline and had captain Steven Davis not fluffed a first-half penalty kick, then this could have been the beginnings of a famous Irish victory.

As it was, a 0-0 scoreline against a Netherlands team who will be one of the favourites for Euro 2020 is hardly unimpressive.

Nevertheless, O’Neill and his players came away “disappointed”. This was an opportunity missed, which is how they felt in Rotterdam having taken the lead and how they felt against Germany in Belfast in September.

Forty-eight hours later in Dublin, Matt Doherty ran onto Enda Stevens’ cross and scored with an unstoppable header to make it Republic of Ireland 1-1 Denmark. It was a cracking goal towards the end of a fine 45 minutes from Mick McCarthy’s team. Again there was Irish conviction, skill and discipline. There was a bit of soul about it.

This was accompanied with some what-ifs regarding playing style and the sense that automatic qualification had not been lost at home to Denmark, but in the rest of the campaign when Irish play had been less easy on the eye.

Ultimately, both Irish teams had come third in their group. Were the Euros not so bloated, there would be no green presence in the finals next summer.

As it is, there is a chance, but it is only that and it may come to a head-to-head between north and south in March. At least it won’t be a night in November a la 1993, but there are plenty who will worry should it happen. James McClean and O’Neill at Stoke City? Paddy McNair and Darren Randolph at Middlesbrough? The citizens of north Belfast?

It will be March 2020 but we know from previous experience there will be some who choose to use Irish football and make it all about 1916 or 1690.

The UK Brexit Election will have passed by then but it would be complacent to say emotions on the ground will have soothed. The election could just as easily create additional border issues as ‘solve’ them. We are in a period of political uncertainty.

Yet we may be close to a new situation. As we approach 2020 and the end of a decade, there are reviews and questions concerning the 10 years just gone. But there is also another question worth consideration: how will Irish football look 10 years hence, in 2030?

At international level, Northern Ireland finished 2009 with a 1-0 home defeat in a friendly against Serbia, having once again failed to qualify for a tournament. Nigel Worthington was in charge.

The Republic of Ireland, well, it hardly needs repeating. Thierry Henry’s hand was shaping the end of the decade. Giovanni Trapattoni was manager and €5 million was on its way to the FAI coffers. Ever so quietly. Hush money.

Euro 2012 and then 2016 were reached and 2020 would make it three in a row. Euro 2012 was the last of the 16-nation Euros. Four years later there were 24 countries at the finals. Lille and Lyon provided lasting images and memories.

But last summer’s World Cup had no Irish team and this Euro 2020 qualification proves that while it is getting easier theoretically, it is getting no easier.

Over the past decade the numbers of Irishmen playing in England’s Premier League has dwindled. Reduced resources have been a constant theme for managers. That has affected squad selection and team style and associations’ bank balances.

Domestically, clubs still fret week-to week while men like John Delaney have prospered. Bohemians won the League of Ireland in 2009 under Pat Fenlon as Cork City were wound up. In the Irish League Linfield moved to another title as penniless Bangor failed to have their league licence renewed.

Along the way Dundalk and Crusaders have bucked trends by making profits via Europe and we are today in a place where Shamrock Rovers have fresh investment, as do Larne and Glentoran. There are green shoots, fragile admittedly, and there are figures such as Kieran Lucid who wish to water them.

Lucid has emerged with his All-Island league plan at a moment of flux. Old certainties – political and bureaucratic – are creaking in some places but resilient in others. The desire for change, which can feel generational, is being resisted even as men such as Stephen Kenny, Michael O’Neill and, perhaps, Lucid, offer alternative approaches.

Kenny’s U-21s outplayed Sweden on Tuesday, 24 hours after Northern Ireland’s U-19s drew 1-1 with Germany, then beat them on penalties. Doses of realism need to be injected, but you can see Irish talent emerging as coaches such as Kenny, O’Neill, Neil Lennon and Brendan Rodgers perform at high levels. Irish football has something, you know.

There is still a major infrastructure deficit, though. There is still insufficient government support for soccer – Niall Quinn has not given up on that.

And in his Dublin office pre-Denmark, Lucid indicated he is not giving up on an All-Island league despite the IFA’s statement three weeks ago that they will not sanction clubs’ involvement.

After a board meeting this week, Linfield, key to the project, remain part of the process and Lucid is not going away. But there will be no All-Island league in 2020 and probably not in 2021. But 2022?

By then, one assumes, there will be greater clarity on the future. Constitutionally, northern Protestants and Unionists accept – in a way they did not before – that there will be a Border poll at some time in the coming years, maybe within 10 years.

The past decade has been one of centenaries and we are about to embark on another. The year 2021 will mark one hundred years since ‘the split’ and formation of the FAI.

Understandably it will attract attention and debate but while all this looking back is going on, it would be good if someone in power was thinking of the future, of 2030.