Chelsea chairman says Abramovich has no plans to sell the club 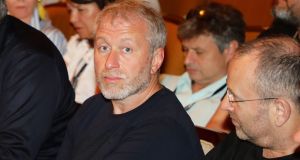 Roman Abramovich has rejected bidders who think they can buy Chelsea at a “bargain” price, and remains just as involved in the club as he has ever been, the chairman Bruce Buck says.

In an interview with the Guardian about the Premier League club’s current status and plans, Buck said the Chelsea owner had no plans to sell despite having apparently not been to a home match since the spring of 2018 when the British government delayed renewing his visa.

Abramovich withdrew his UK visa application after the delay, which was widely understood to be part of the retaliation against Vladimir Putin whom the British government directly blamed for the Novichok poisoning of former Russian spy Sergei Skripal and his daughter Yulia in Salisbury. Abramovich took Israeli citizenship in May 2018, and cancelled a new 60,000-seat, £1 billion stadium development long planned for Stamford Bridge.

However, of suggestions that Abramovich may be planning to sell, Buck said: “So far as I know, absolutely not; to the contrary. I have never heard a word from Mr Abramovich ‘let’s get this ready for a sale’ or something.

“Because of the political situation there are people who think they might want to buy Chelsea football club at a bargain. We do get inquiries, and we really have nothing to say to these people.

“He talks to Marina [Granovskaia] – the board member who supervises the football operation – several times a day, every day. Marina has been doing that for seven or eight years; that hasn’t let up or changed at all.”

Responding to the suggestion that the club appears to be on hold given Abramovich’s absence and the mothballed stadium plans, Buck said: “I understand what you are saying and it is hard to disprove it, except to say ‘let’s see what happens in the next transfer window.’

“The point I am making – it’s a glib one – if we go out in the next window and spend a zillion, it’s pretty hard to argue that things are on hold.”

Buck acknowledged that the first-team opportunities Frank Lampard has given to the talented group of English graduates from Chelsea’s academy is partly due to the two-window ban, imposed for multiple breaches of the registration rules for under-18 players from overseas.

Mason Mount, Callum Hudson-Odoi, Fikayo Tomori and Tammy Abraham all featured for England during this month’s internationals against Montenegro and Kosovo.

“The transfer ban has led to more opportunities for the young players,” he said. “It makes Mr Abramovich very happy, because he is very interested in the academy. I would guess he’s one of the very few owners that have been to lots of academy matches.”