Ken Early: Can City maintain their intensity even when they’re chasing?

Often teams who has excelled under ultra-demanding manager suddenly collapse 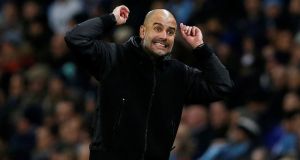 Pep Guardiola was getting towards the end of the press conference after Manchester City’s 2-1 win over Chelsea when a reporter asked his opinion about an interesting Opta stat that was doing the rounds. City had recorded only 46 per cent possession in the game – and Opta noticed that this was the first time a Guardiola team had ever had less than 50 per cent possession in 381 league matches since the start of his top-level coaching career in 2008.

Pep greeted the news with a wintry smile. “Always, there is once in a lifetime. It happen. So . . . okay. I have another record. I won one game without winning possession. Put it in the schedule.”

Guardiola later expand on the previous answer. “They [Chelsea] are incredible team, so Jorginho can take over, and they play so good, so it’s normal, can happen.”

It can happen, and it would not be an issue except that it never did before. After all, if you go 380 matches without something happening – the equivalent of 10 full Premier League seasons – it does feel significant when it finally does happen.

Make no mistake, the fact that no team had dominated possession against Guardiola in his league career was just as much of a point of personal pride for him as that 150-match, nine-year unbeaten home record in the league was for José Mourinho.

Why did City not dominate possession as usual on Saturday?

As Guardiola explained, two of the three starting midfielders, Rodri and David Silva, were not fully fit and both were withdrawn in the second half. City’s most dominant central midfielder, Fernandinho, is playing in defence because of the injury to Aymeric Laporte. And the forward who is best at keeping the ball and recycling attacking possession, Bernardo Silva, was suspended.

So on the day a Chelsea midfield including Jorginho and the workaholic pair of N’Golo Kante and Mateo Kovacic – who each put in 20 challenges in the match – proved good enough to dominate, particularly as City spent much of the second half defending a 2-1 lead.

Perhaps this would feel less significant if it had not been part of a wider trend of a slight but tangible slackening in City’s football. Last season they averaged 722 passes per match. This season that has fallen to 668 – a 7.5 per cent drop, which would not be too worrying, except that they only won the league last season by 98 points to 97. Against opposition this relentless even a 2 per cent drop puts City in second place.

The sense of a certain easing-off is backed up by the fact that City have played fewer than 600 passes in each of the last three matches – against Chelsea, Liverpool and Atalanta. It’s the first time this has happened since December 2016, when Guardiola was still putting his stamp on the team.

The result of City dropping a little off their standards of the past two seasons is that they are on course for a total of 81 points. That would win you the league some years, but Liverpool are currently on course for 108.

We can safely assume that Liverpool are going to drop some points. Yet for City to get even 90 points from their current situation they will have to win at least 19 out of the 25 matches remaining. It’s the sort of thing they’ve done in each of their title-winning seasons so far. The question is whether they are capable of doing it all over again, when the effort this time looks like it could be in vain.

It’s been a year of firsts for Guardiola. It’s the first time he has been so far behind a title rival at this point of a season. He only lost the title once in four years in Spain, and in that 2011-12 season his Barcelona trailed Mourinho’s Real Madrid by three points after the 13th round. Likewise he has only lost one title in England, and in that 2016-17 season City were just one point behind the eventual winners, Chelsea, after 13 matches.

It remains to be seen how Guardiola will adapt to this unfamiliar situation. The unforgiving intensity with which he approaches the job seems appropriate when everyone is energised by the knowledge that the team is neck and neck in a tight race. It’s different when you are already a long way back and some people have started to lose hope.

Recent years in the Premier League have seen a trend where a team that has excelled for a time under a highly-strung, ultra-demanding superstar manager becomes suddenly exhausted and collapses almost without warning.

It happened to Mourinho’s Chelsea in 2015 – and not because the players were too old or somehow past it, but because they tired of being flogged by Mourinho, and revolted. Most of the same players recovered to win the league under Antonio Conte in 2017.

And then the same thing happened again as Conte’s abrasive personality and ceaseless demands wore everyone down.

More recently there has been the example of Mauricio Pochettino’s Spurs, who defied the economic odds for years before finally collapsing in 2019. The same manager and the same players can’t keep getting the same results indefinitely, particularly when the team ethos is as physically and mentally demanding as Pochettino’s. It was as though his players collectively decided that if they couldn’t have a rest, they needed a change.

And the managers themselves seem happier to go rather than staying and fighting to turn things around. Pochettino seemed to sulk through the last few months of his time at Spurs. Maybe the reported payoff of £12 million will help him rediscover his love of the game.

Manchester United paid Mourinho and his staff nearly £20 million in compensation after sacking them last December, bringing the total career compensation pot shared by Mourinho’s crew to around the £50 million mark. To be clear, that is compensation received after leaving clubs, not salary received while working at those clubs.

Conte took Chelsea to an arbitration tribunal after they sacked him and was awarded compensation of £9 million. He is now at Inter, where he is already complaining about the lack of support from the board, mysteriously unconcerned about what this deterioration of relations might mean for his job security.

Taking over at Spurs during the week, Mourinho mentioned Arsene Wenger as the last of the managers who spent decades at one club.

Maybe one reason why managers of old seemed more ready to roll with the punches is that they were seldom catapulted into the ranks of the super-rich by the simple expedient of losing their jobs. If Guardiola were to feel things turning against him at City, he would not feel any pressure to dig in and tough it out for the sake of securing his family’s financial future.

City are a better team than Conte’s Chelsea or Pochettino’s Spurs but the standards they are expected to meet are also higher, and now they are chasing to make up lost ground. Only wins are good enough, everything else, no matter how hard-fought, is a disappointment.

The pressure is intense, and these players have been feeling it for years. The 10 games they play before the New Year will tell us a lot about whether they can defy the lesson of recent history: that when the tide starts to turn, it goes out faster than you think.