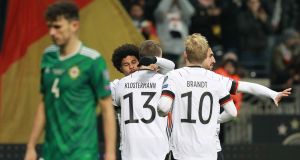 Gnabry failed to make the grade at Arsenal and even West Brom but is flourishing with Bayern Munich and he moved on to 13 goals in as many international appearances with a brilliantly-taken hat-trick, while Leon Goretzka scored a brace and Julian Brandt added a sixth late on.

It was Northern Ireland’s heaviest defeat since they lost 6-0 to Holland in O’Neill’s second game in charge back in 2012.

It was a painful way to end this campaign, though they can already look forward to next March as Wales’ victory over Hungary means they are set to head to Bosnia in the play-offs.

O’Neill plans to remain in charge for that match alongside his duties as Stoke boss, and will hope a side that has gone toe-to-toe with Holland and Germany — in Belfast at least — in this qualifying campaign can improve on last year’s 2-0 Nations League defeat in Sarajevo. Getting a result in Frankfurt was always going to be a tall order.

Northern Ireland had not beaten Germany since that famous night in Hamburg in January 1983 and their odds of ending that wait lengthened considerably before kick-off with news that Jonny Evans had been ruled out through illness, replaced by Sunderland’s Tom Flanagan.

With Jamal Lewis already out with a knee injury, that left Northern Ireland with only one Premier League player in the side — Craig Cathcart who was, along with Hull’s Josh Magennis, earning his 50th cap.

They got the ideal start when George Saville’s hooked cross from the left was deflected by Toni Kroos and fell kindly for Smith and the Hearts right-back drilled it into the bottom left corner.

But Germany’s response was swift. Bailey Peacock-Farrell was smartly off his line to deny Gnabry at point-blank range before Ilkay Gundogan headed against a post.

The equaliser arrived in the 19th minute and in some style as Gnabry controlled Jonas Hector’s cross before turning and firing into the top right-hand corner.

But Germany were in the ascendancy as they dominated play, and they had their second goal just before the break, albeit one that was somewhat more scruffy than the first.

Hector’s cross from the left squirmed across the goal area before Goretzka just managed to beat Shane Ferguson to the ball, deflecting it on to a post and in.

Gnabry needed only a minute of the second half to add to the lead, controlling Lukas Klostermann’s pass before drilling the ball beyond the reach of Peacock-Farrell.

And his hat-trick arrived on the hour. Goretzka’s angled pass found the 24-year-old’s run and he out-muscled Flanagan before slipping the ball under Peacock-Farrell.

Germany showed no mercy and had their fifth when Goretzka collected his second 17 minutes from time, firing through a crowd of players to score from the edge of the area.

There was relief for Northern Ireland when Gnabry was withdrawn nine minutes from time, but it was not the end of their punishment as Brandt added a sixth in stoppage time.