Dele Alli can be Mourinho’s project player at Spurs 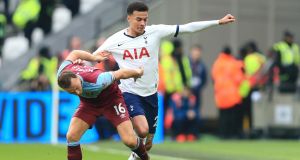 As Dele Alli fell while trying to reach yet another overhit pass from Eric Dier, it seemed unlikely that the Tottenham attacker was about to remind the world of the imagination that makes him special. The West Ham fans were jeering and Dier was getting ready to apologise when Alli, not so much thinking on his feet as on his back, produced the outstanding moment of José Mourinho’s first game in charge, a flick that allowed Son Heung-min to cross for Lucas Moura to double Tottenham’s lead.

What must Mauricio Pochettino have made of that glimpse of Alli at his audacious best? Think of the finest moments of the Pochettino era and Alli is often involved. His standout performance came in 2017, when he destroyed Real Madrid in the Champions League, and picking the 23-year-old’s best goal is not straightforward.

Inevitably the mind goes to that outrageous spin and volley against Crystal Palace in January 2016, but how about the ability to pluck a long ball out of the sky before scoring against Chelsea at Stamford Bridge in April 2018? Or that solo effort against Arsenal in the League Cup last year?

Yet while few players are as dangerous as a focused Alli, his standards had dipped long before the drama of Pochettino’s firing and Mourinho’s appointment last week. He struggled after injuring a hamstring in January, went 10 months without a goal for club and country before scoring against Watford last month, and has lost his place in the England squad.

At least he appeared to be heading down the right path against West Ham. Mourinho had wanted to see the real Alli, not his brother, and what he got at the London Stadium was a player determined to impress his new manager. It was Alli’s most effective game this year; he ran rings round West Ham’s flimsy midfield.

For Alli, the challenge is shining again when Tottenham host Olympiakos in the Champions League on Tuesday. He needs to be consistent and tactically disciplined under the new regime, and it already feels like his relationship with Mourinho is going to be fascinating.

Mourinho and mercurial creative talents have not always been a good mix. The coach fell out with Arjen Robben during his first spell at Chelsea, his relationship with Eden Hazard was up and down when he returned to Stamford Bridge, and he never clicked with Paul Pogba at Manchester United. Yet there have been positives: Mourinho made Joe Cole more efficient, and Deco was influential in his great Porto side. He liked Mesut Özil at Real Madrid. Wesley Sneijder played the best football of his career when Mourinho was at Internazionale.

On the evidence of his performance in Tottenham’s win over West Ham, Alli plans to be more Sneijder than Pogba. With Christian Eriksen left on the bench, Alli played as a number 10 and he was excellent during the first half, exploiting the weaknesses on the right side of West Ham’s defence by inching to the left to create overloads with Son.

Alli was involved from the start, creeping into space to release Harry Kane, whose goal was disallowed for offside. Suddenly the memories came flooding back. When Tottenham were at their physical peak under Pochettino in the 2016-2017 season, Alli’s understanding with Kane was devastating. He played as a second striker and scored 22 goals in all competitions.

Spurs will benefit if that link between Kane and Alli is restored. Yet perhaps that role as a second striker disturbed Alli’s rhythm. When he arrived at Tottenham in 2015, he had a spell playing in a midfield two before moving farther forward. His goal threat made him an effective forward when Pochettino was using a 3-4-3 system, but he looked like he had lost some of his positional awareness when he was moved back into midfield.

The number 10 role is up for grabs in Mourinho’s 4-2-3-1, though. Mourinho prepared for his first game by working on quick transitions from back to front, and Alli did not disappoint when the ball reached him, creating the opening goal for Son with a fine pass.

Then came the moment that demonstrated Alli’s intelligence. He was lying on his back on the left touchline but he was in control of the situation. Mourinho has his project player. – Guardian