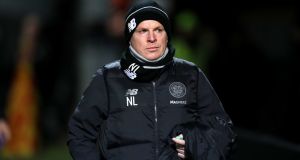 Celtic manager Neil Lennon: ‘Looking at the league table I think we are still top of the league even though they have a game in hand.’ Photograph: Jane Barlow/PA Wire

Neil Lennon insists any talk of Celtic’s title demise is premature as the second half of their Premiership campaign begins against Kilmarnock on Wednesday night.

The Parkhead club have won the last 10 trophies available in Scotland and are going for nine league wins in a row this season while hoping to clinch a domestic quadruple treble.

However, Rangers’ 2-1 win at Parkhead at the end of last year took Steven Gerrard’s side to within two points of the champions with a game in hand, giving added hope to the Ibrox side of ending the domination of their Old Firm rivals.

Asked if he thought suggestions that a changing of the guard might be hasty, the Celtic boss said: “I think it is very premature, yes.

“Looking at the league table I think we are still top of the league even though they have a game in hand.

“We won the [League Cup] and up until then [the defeat to Rangers] we had won 11 [league] games in a row. So we are very positive about the second half of the season. So look, I can’t control what other people think.

“You expect it sometimes off the back of a defeat but a lot of people over the years have been proven wrong.”

Lennon expects his squad’s winning mentality to play its part over the run-in.

“That experience might stand them in good stead but every season is different,” said the former Celtic captain, who revealed that Ivorian midfielder Ismaila Soro is undergoing a medical in Israel as he waits for a visa to be sorted to confirm his move from Bnei Yehuda.

“We have a good, strong, core of players in there who are winners and they won’t want to give anything up lightly as we have seen already.

“So the second half of the season should be exciting. Killie are a tough nut to crack. There has been a change of manager twice and I think Alex Dyer might go back to the way they played previously.

“We are away from home, we know the venue is tough, we know the artificial surface isn’t always conducive to playing the style of football that we like but we are aware of that so it will be difficult but it is one we are looking forward to.”

Gerrard has called on the Ibrox support to roar his players through their gruelling title-race schedule.

Gerrard’s side return to Premiership action for the first time since their Celtic Park triumph when they host St Mirren on Wednesday night.

But the second half of the campaign is set to test their stamina levels to the maximum.

As well as their St Mirren clash, Rangers also have another 14 games – nine in total at home – crammed into an eight-week period leading up to the next international break.

That hectic calendar could become even busier if they progress past Braga in the Europa League and Hamilton in the Scottish Cup.

The Englishman – who has axed Eros Grezda and Andy King this month while also allowing Jamie Murphy and Jamie Barjonas to leave on loan – is confident he has the numbers in his squad to cope with their exhausting programme.

But he wants the Rangers faithful to do their bit to help his team by pumping up the volume levels.

He said: “We had a six-week block before the break where it felt we were away for the majority of it. We now need to make the most of Ibrox and we’ll certainly need our fans to make some noise.

“Hopefully we can get back into our rhythm and build on our last league performance. Our next midweek off isn’t until the next international break and if we can perform like we are capable against Braga then there could be more fixtures in the pipeline. There’s also the Hamilton game in the cup.

“It’s what we’re used to and I think that’s when we’re at our best. It’s an exciting time, the players look ready and hopefully they can perform against St Mirren.”

Rangers sit two points behind Neil Lennon’s Hoops but have a game in hand.

1 Gordon D’Arcy: Team change now has to happen before Paris
2 Ouf of Bounds: Patrick Reed helping make the ‘C’ word less taboo
3 Kevin Seaward: ‘The first time I wore the Vaporflys, I hated them’
4 Cheltenham keeping a watching brief on coronavirus
5 IRFU not consulted prior to Minister Harris’ recommendation to cancel Ireland v Italy
Real news has value SUBSCRIBE
Crossword Get access to over 6,000 interactive crosswords