Bond between Rafa Benitez and Anfield formed on facts and lies 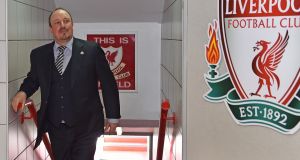 Istanbul bonded Rafa Benitez to Liverpool FC, and his activity with the Hillsborough Family Support Group bonded him to the city. Photograph: John Powell/Liverpool FC via Getty Images

The telephone rang in Freddy Shepherd’s holiday villa in Majorca. It was late July 2004 and Shepherd, the Newcastle United chairman, was about to partake in a conversation that would have serious ramifications for his manager, Bobby Robson.

Robson was 71, and his contract had one year left. As yet, though, there was no extension. Robson was eager for one.

There was, however, much debate on Tyneside as to whether he merited one. In a word, Shepherd killed that debate.

The chairman had been talking about how the club needed to be more “flexible” in their dealings and thinking. Asked if that flexibility extended to the idea of Robson being at St James’S Park for longer than the coming season, Shepherd replied: “No”.

There was a pause on the phone. We both knew what this meant and we also both knew that Robson would know. This was the beginning of his end.

Shepherd, sensing the drama, then joked that Robson would be “in the Guinness Book of Records” if he stayed. He called Robson “Bob” and he had recruited him, but Shepherd quickly returned to the previous season, breaking it into three parts. The first and third of these, Shepherd described as “unacceptable”.

He was telling a truth that looks brutal now given the revisionism surrounding Robson. But it was a truth.

Under Robson Newcastle had flown through 2002-03, playing Champions League football into March and finishing third in the Premier League. But the following season Newcastle lost their Champions League qualifier to Partizan Belgrade and so played in the Uefa Cup. They reached the semi-final but lost to Marseilles, who had a young Didier Drogba up front.

In the Premier League their points tally dropped from 69 to 56 and Newcastle were fifth. There would be no more Champions League and all the revenue implications that came with that demotion. There was a pattern of decline.

It was Liverpool who finished fourth. The two clubs had been in a race for the last Champions League place, but when they met at Anfield on the last day of the league season, Liverpool had secured it.

Not that Anfield was happy; like Newcastle, Liverpool had invested in players and were dissatisfied. Gerard Houllier was out.

Liverpool had made their big decision, and by May, whereas on Tyneside Shepherd stalled, Robson limped on, not only undermined by “No” but by Shepherd’s listing of failings in the transfer market – £24 million on Viana, Cort, Bassedas and Bramble. As Mike Ashley realised when he bought Newcastle, £24 million, plus wages, leaves a hole.

Of course, falling revenue did not hit the Shepherd and Hall families’ remuneration; nor did the signings stop. Six more came in, Patrick Kluivert among them.

The truth was Robson did not want Kluivert. But he was there, so Robson played him at Aston Villa and it cost the manager his job, because he dropped Alan Shearer.

Previously Robson had been good at playing the upstairs-downstairs game, massaging small lies into near-truths, as managers do. But then he asked Celtic if they fancied Shearer, just as Shepherd was working to bring in Kluivert, and it turned out to be Robson’s last act. Villa became his last match.

Freddy Shepherd died this week aged 75. In the reviews of his era at St James’s Park, Shepherd’s treatment of Robson has been highlighted. It still looks brutal to some. Shepherd the cynic, Robson the romantic.

Yet to others, then and now, it felt Shepherd was not brutal enough and that the truth was Robson should have gone at the same time as Houllier. Shepherd said he didn’t “want to shoot Bambi”.

Alternatively, as Robson was entitled to argue, when he named his team with either Kluivert or Shearer in it, it was not his team.

Which brings us back to why Rafa Benitez says football is a lie.

When he and Jürgen Klopp send out their teams at St James’s on Sunday, they will be viewed as representations of each manager. Both will be judged on them over 90 minutes.

But in the summer, had Klopp named his ideal Liverpool XI, it would surely have had Virgil van Dijk in defence and Naby Keita in midfield.

Benitez would agree. He has a list of players Newcastle failed to buy. Still, both managers will receive their weekly judgment based on what they have, not what they wanted.

Benitez would like us to step back from that, look at the game as a whole, as an industry. Many times have we heard that in professional football, everything stems from the pitch – which does ring true. But Benitez would say that what is on the pitch may stem from elsewhere, not the dugout.

His line about a lie sounds emphatic, but is more nuanced. Even when things were going well – at Valencia – Benitez knew the game often included a series of evasions about injuries, or omissions about selection, or form, or ego or money. It’s not only about those 90 minutes. You can feel Robson nodding.

Benitez discovered this young; he earned his cynicism early. He was seriously injured at 19 and retired from playing at 26. There was education as a youth coach under a true football man, Vicente Del Bosque, but then dismissal after 23 games in Benitez’s first job at Real Valladolid and after eight games in his second at Osasuna. Benitez thought the owners either did not understand or did not want to know the real truth, and experiences such as these open your eyes.

Fortunately for him, the game brings different experiences and it is remarkable to think back to 2004-05 and that Benitez’s first season at Liverpool should end in Istanbul and the Champions League title. His first season.

Here was a different truth, one that will be forever savoured at Anfield, one that will in part explain the warm reception Benitez will receive from visiting fans at St James’s.

Istanbul bonded Benitez to Liverpool FC, and his activity with the Hillsborough Family Support Group bonded him to the city. Benitez understood football had been lied to over Hillsborough.

His relationship with Tyneside is unlikely to ever cut so deep, but it is sincere – going to see the Angel of the North in the rain, then providing possible improvements, was classic Benitez. The people smiled.

Just as they smiled at Bobby Robson. Football managers – they know and they don’t want to know. Cynicism and romance: football’s two up top.

Tipping Point: DeChambeau’s transformation raises questions, but who will ask them? 07:00
John Maughan: This year's All-Ireland will be tainted, whoever wins it 06:45
Ken Early: Resurgent United can be the top team – in Manchester 06:46
TV View: Stunned silence as Serpentine wins a socially-distanced Derby 06:00
The Game Changers: How Jonah Lomu’s dramatic arrival heralded rugby’s new dawn 06:00

1 Ken Early: Resurgent United can be the top team – in Manchester
2 Tipping Point: DeChambeau’s transformation raises questions, but who will ask them?
3 John Maughan: This year's All-Ireland will be tainted, whoever wins it
4 The Game Changers: How Jonah Lomu’s dramatic arrival heralded rugby’s new dawn
5 TV View: Stunned silence as Serpentine wins a socially-distanced Derby
Real news has value SUBSCRIBE