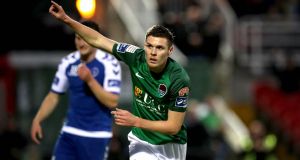 Cork’s Garry Buckley celebrates scoring the only goal of the game in their FAI Cup semi-final win over Limerick. Photo: Ryan Byrne/Inpho

Cork City have reached the final of the FAI Cup for a third successive season after narrowly defeating Munster rivals Limerick at Turners Cross on Friday night.

A tidy finish from Garry Buckley early in the first half was enough to see the cup holder’s progress to the showpiece occasion at the Aviva Stadium where they will meet the winners of Dundalk and Shamrock Rovers.

These two sides met just seven days ago at Market’s Field in the league with Limerick emerging 2-1 victors to boost their hopes of avoiding relegation.

Neil McDonald made just the one change to that side with Dean Clarke taking the place of Barry Cotter while City made two changes to the team that was held by Dundalk on Monday night with Conor McCarthy and Kieran Sadlier replacing Steven Beattie and Jimmy Keohane.

Karl Sheppard’s clever pullback found Buckley in space in front of goal but, with only the keeper to beat, the playmaker inexplicably scuffed his strike over the bar shortly before Ryan Delaney did similarly with a close range header from a Shane Griffin corner.

But City finally made their early dominance count as they took the lead after a quarter of an hour with Buckley atoning for his earlier miss.

Sheppard’s neat lay off was volleyed to the back post by Sadlier and the City attacking midfielder was on hand to tuck the ball home from a few yards.

Buckley spurned another glorious opportunity to double City’s advantage after 20 minutes when he powered a free header off target before Limerick finally sparked into life.

Former City midfielder Shane Duggan nodded just past the near post from a good position before Rodrigo Tosi was unfortunate to see his goal bound shot blocked by Republic of Ireland under-21 international Ryan Delaney.

The Super Blues’ best moment of an entertaining first 45 fell to the pacy Chiedozie Ogbene, who helped John Caulfield’s side overcome Dundalk in the final of this tournament last season.

The 20-year-old winger created space on the edge of the Cork penalty area but his powerful strike appeared to take a deflection, allowing the outstretched Mark McNulty to make a superb save low to his right just before the half time interval.

Limerick began the second half in a similar manner to how they ended the first and their boisterous following, who made their voices heard as part of the 3,563 crowd in attendance, thought they had levelled terms after 55 minutes.

Bastien Hery’s crossfield pass picked out the run of Rodrigo Tosi but the Brazilian striker’s looping header dropped just over the bar rather than under it.

The towering Ryan Delaney went close to easing the growing tensions amongst the City faithful on the hour mark but couldn’t keep his header down following Sadlier’s corner.

City showed their experience as they killed off the game in the final half an hour although they did endure a late scare when the defence had to scramble Bastien Hery’s late header off the line to keep their hopes of a double alive.